Fossil Creek: A haven for hikers and swimmers alike 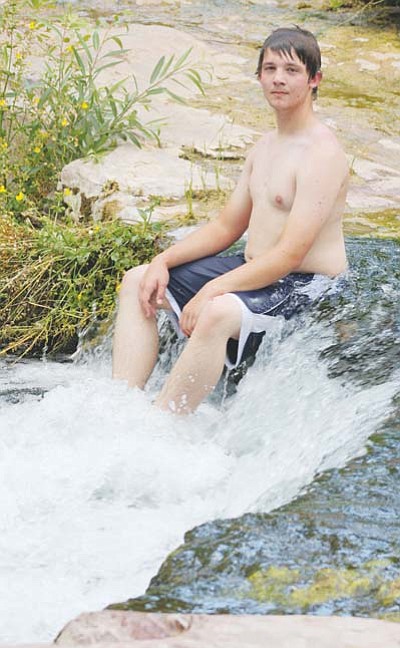 <i>Stan Bindell/NHO</i><br>Brandon Johnson enjoys the cool cascade of a small waterfall while sitting near wildflowers.

FOSSIL CREEK, STRAWBERRY, Ariz. - Those who love swimming will love the Fossil Creek hike. But those who love birds, flowers, butterflies and waterfalls will also be smitten.

Hiking books describe this hike as anywhere from a five mile to 7.5 mile hike, but those who want to explore further downstream can go many more miles.

Hiking buddy Brandon Johnson and myself made it into an 8.3 mile hike as we hit the two main swimming holes as well as going off trail and doing some stream rock hopping, bolder hopping and tree climbing.

Century plants were in bloom right by the trailhead.

The trailhead was marked clearly enough and a sign-in sheet is found a few feet from the trailhead. At this point, there are trails going to the left and right. Don't get shaken. They both lead downhill to the same place. Firecracker red penstemons and small white star flowers soon greet the hiker. The trek follows an old jeep trail, steep in spots, full of scree.

There are 30 types of trees along the way including sycamore, cottonwood, Arizona walnut and alder. There are also more than 100 types of birds. The highlights of this trek included photographing a Black Headed Grosbeak and an Eastern Collared Lizard.

Despite the large amount of trees, a lot of the hike down was in the hot sun. The hike drops in elevation from 5,600 to 4,300 feet.

About three miles down, the trail turns south and it's about a half mile more to Fossil Springs. A gate greets the hiker to let them know they are getting close. Not far from the gate, those looking for more mileage find the sign for the Mail Trail, which is 3.1 miles.

Small puddles of water give the hiker an idea of what will soon be found. Next comes a small beautiful stream that will match anything in Sedona or Oak Creek. Then comes a bit of a dry streambed with plenty of rocks before finding more small puddles and at last the first main swimming hole.

After walking down in the heat, Johnson can't wait to get in the water as he rips his shirt off and jumps in. I'm too busy enjoying the view as the swimming hole is surrounded by yellow monkey flowers, other flowers, cascading water upstream, trees and birds.

Not long after, we both discover fish in the water. They aren't big, but there are plenty of them. The fish found in Fossil Creek include Roundtail Chub, Sonora Sucker, Desert Sucker, Headwater Chub, Longfin Dace and Speckled Dace.

These are all native fish as the non-native fish were removed in the area as part of the decommissioning of an Arizona Public Service hydroelectric plant in the spring of 2005.

The decommissioning of the plant was no small feat. It took 15 years to decommission the plant that went up in 1908. The project involved APS, state, federal and tribal agencies as well as environmental groups.

A documentary, "A River Reborn: The Restoration of Fossil Creek" was made about the decommissioning and airs periodically on PBS.

Congress declared Fossil Creek a Wild and Scenic River designation, meaning it gets extra protection. The only other part in Arizona with the designation is part of the Verde River.

A year ago May 30, Robert Bear of the Yavapai Tribe was part of a gathering in Camp Verde that celebrated the decommissioning of the APS hydroelectric plant. Bear said Fossil Creek is a special place with healing qualities for everyone who visits it.

Tribal folks and environmentalists love this place, but I think anybody who visited here would have a hard time not loving it.

About 25 people were on the trail this day. After we were in the first swimming hole for about an hour, a couple told us about a second swimming hole upstream that was even bigger and deeper. I wanted to do a little bit more exploring and once Johnson heard about another swimming hole we were on our way.

This is where it became interesting. To get to the second swimming hole, there are many trails. Some are lower and some are higher up. We decided to take one of the lower trails. It was probably more fun, but those not wanting to get wet until the swimming hole may decide to take the upper trail.

The lower trail led through some thick bushes with thorns and wild blackberries. Eventually it came to a place with about a six foot drop-off and then into the stream. This was decision time. We didn't want to go back and we were feeling adventurous so we somehow maneuvered down the six foot drop-off and swam across the creek where we picked up the trail. After a little further, we started rock-hopping down the stream.

Again we ran into a dead end of a sort. There was too much water to cross and we still wanted to make it to the second swimming hole. We came to a place where there was no place to rock hop. We had to maneuver up two big boulders and get to the trail by climbing onto a downed tree branch and crawling across to finally get back on the trail. There were some major ouches on the knees during this process.

We finally were back on the trail and then came down to the stream to once again rock hop our way to the second water hole. Much of the rock hopping was on fossilized rocks that were made that way naturally by the minerals that deposited into them.

Finally, we reached the second swimming hole and it begins with a nice sized waterfall. The first swimming hole was crystal clear water, but after the swimming hole just below the waterfall there is another rush of cascading water.

The cascading water appears baby blue before it becomes calm and then it turns into a green turquoise right at the point where an underwater cave is found. The cave only goes in about 10 feet, but some of the visitors swam all the way in, climbed up about five feet onto a ledge and dove in. Not many other people went in this far; just six teenagers from the Phoenix area.

This was the perfect place to swim, relax and have lunch.

This was the turnaround point for this day, but for another day adventuring downstream toward the southern part of Fossil Creek would be entertaining.

For the trek out, we took the upper trail. It was much quicker and easier to get back to the initial swimming hole, which was just about a half mile away. It took more than an hour coming in and probably about 15 minutes coming out.

It had rained lightly while we were at the first swimming hole and the clouds stuck around. We were lucky; it meant the climb out was not nearly as hot or sunny as the way in. Johnson said he wanted to return to this hike and that's just fine with me.