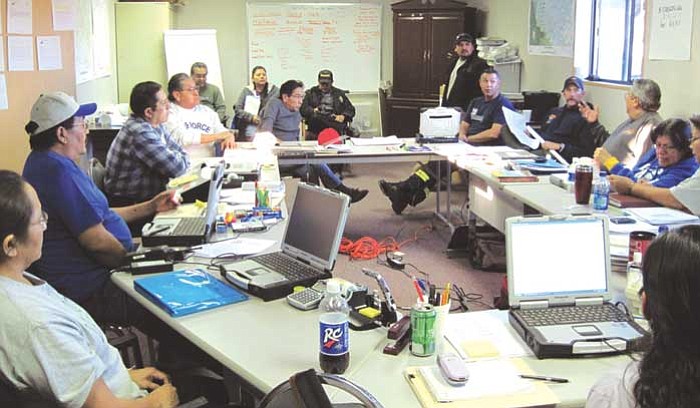 HOPI RESERVATION, Ariz. - Like the rest of Arizona, the Hopi Reservation last week was inundated with record setting snow and rainfall. As a result, Hopi Tribal Chairman Leroy Shingoitewa issued an executive order on Jan. 21, declaring the Hopi reservation a "natural disaster area and in a state of emergency" instructing all tribal departments and programs, specifically the Hopi Emergency Response Team (HERT) to mobilize and respond to the community in its time of need.

The Hopi Reservation stretches 92 miles from the Moencopi Villages near Tuba City to the top of Keams Canyon and its easternmost community of Spider Mound.

Every Hopi village was affected in some way. Flat rooftop cave-ins were reported, as well as mud and rain running into village homes, livestock survival issues, medical prescriptions for elderly that had run out, limited wood and coal heating supplies, and water freezing in pipes.

In some cases, a severe shortage of food supplies was reported, particularly for those who live in Spider Mound, where mud and snow were knee high.

On Jan. 24, it was reported that there was at least one fatality of a Hopi tribal member from Dilcon who died of exposure. As of press time, the individual had not been identified pending notification of next of kin.

There were also two medical

emergencies of a small child and one young woman. Hopi medical ambulances got stuck in the mud but eventually, safely delivered the two to the Hopi Health Care Center.

HERT Incident Commander, Clayton Honyumptewa, who is the Director of the Hopi Tribe's Office of Hopi Lands, had his entire emergency response team at the Kykotsmovi Law Enforcement Resource Center for a weekend debriefing.

Honyumptewa brings with him, much prior experience in dealing with natural disasters on Hopi and is extremely familiar with all the land areas since that is his regular job position, making him critically important in assessing areas that are affected by situations just like this one this week.

Communications and dispatch was handled by Hopi Police Enforcement.

Chairman Shingoitewa stated, "I want to thank everyone here for their professional and swift assistance to the Hopi people. It was a good experience for me personally, to see how Incident Commander Honyumptewa and HERT organizes emergency services especially to our people out at Spider Mound. I also want to acknowledge the Hopi BIA Agency for blading ... the village dirt roads. These areas are extremely muddy and dangerous for our members to be driving back and forth on."

Vice Chairman Herman Honanie added, "I really appreciate the HERT for hanging in there for seven straight days. I really appreciate it. I'd also like to thank our state and county reps for being here, they responded no questions asked when they knew we had a serious reservation-wide situation. They have helped with their road and medical support and I can't thank them enough."

Altogether, the HERT team spent approximately $94,764 in diesel fuel, rented road equipment and aggregate costs alone for the week. With the final reservation-wide damage costs not yet factored in, that amount could well go over $200,000.

The money for these type of emergency costs comes from a tribally subsidized Emergency Contingency Fund. Honyumptewa said that the Hopi Council needs to understand that natural disasters cost quite a bit of money and that a lot more money should be allocated each year to help protect the lives and safety of the Hopi community.

According to Wadsworth, "We were dealing with all kinds of emergency requests this week. [A] Spider Mound mother who needed formula for her infant because the power went out on the entire Hopi reservation and with the roads completely muddy could not get to the store for the critically needed baby formula. Also we had eight separate calls for serious medication needs [and] with the hazardous road conditions, medication had to be trucked in to those remote areas ... [There was] sandbagging going on in individual villages - there was so much rain, hail and melting snow. We really appreciate all the individual [Community Service Administrators] at each village who got their own community people to pitch in, helping the elders bring in coal and wood, checking on them, we just didn't have enough manpower."

Wadsworth added, "[T]he Hopi Vets Center [will still be used] for our HERT staging area to distribute medical and food supplies, but we are asking that all Hopi members take your individual family requests to your village CSA's for processing, including wood and coal delivery. One of our local CSA's, Beth Cascaddan at Sichomovi Village, singlehandedly went out and got massive off-reservation donations for food and water for our community. She really pitched in. Also, the manager at the Hopi Cultural Center, she just was really great. We really have to remember that none of us can get by alone."

(Editor's note: For clarification purposes, Maxine Wadsworth's title in this online article was changed to HERT Public Information Officer, so as not to be confused with Tina May, who is the Hopi Tribe's Public Information officer.)