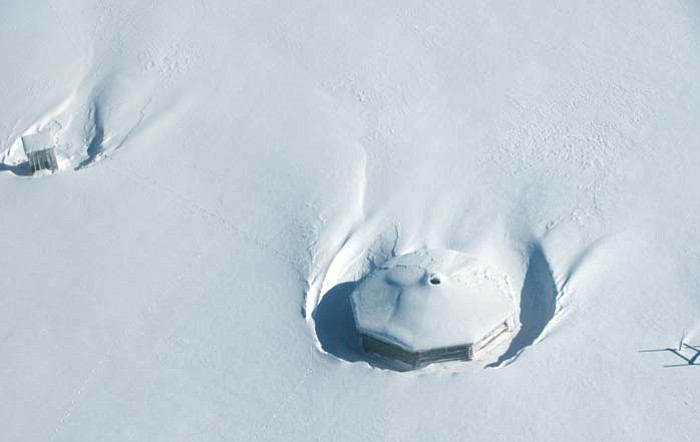 <i>Courtesy photo</i><br> An aerial photograph provided by the Navajo Nation shows the extent of last week's winter storms and the dire emergency that now exists for much of the Navajo Nation. Knee-deep snow, rivers of mud and attacks on livestock by mountain lions are just several concerns being dealt with by the Tuba City Incident Command Post (ICP).

Locally, Coconino County Supervisors Mandy Metzger (District 4) and Lena Fowler (District 5) are both working with officials at the ICP to help address concerns related to snowbound residents all across the Navajo Nation.

But they are contending with a number of near-impossible hurdles, which is making it extremely difficult to get to people in need. Officials continue to push for additional volunteers and equipment to provide quicker service and response times.

Lloyd Secody, a representative of the Bureau of Indian Affairs (BIA) Road Maintenance Program reported that while about 75 percent of BIA-maintained roads were clear and open, the melting snow has made the dirt roads in some of the more remote areas virtually impassable. He described these dirt roads as "rivers of mud." Secody added that in some areas, the mud and snow is so deep that not even road graders can make it through. So they are currently relying on several two-track bulldozers to clear the roads.

In the Preston Mesa area, there have been reports of mountain lions killing livestock. So far, no people have been attacked, however, three sheep and three cows have been killed and one horse was attacked. Residents are urged to contact the ICP with reports of additional livestock attacks by mountain lions.

ICP officials are currently working with law enforcement, public health nurses and Community Health Representatives (CHR) to visit and assess the needs of high risk patients and those who require immediate medical attention. The ICP has been sending out several assessment teams each day to check on people. The current priorities are the elderly, children, those with urgent medical needs, those needing food and fuel and livestock. As efforts progress these priorities will be evaluated and adjusted to better meet peoples' needs.

Distribution of food and supplies has been somewhat slow, due in part to the impassable roads, some of which are only wide enough to accommodate a single vehicle. Air support has been requested and several Blackhawk helicopters were expected to arrive soon to assist with delivery of supplies. Attempts are also being made to procure snowmobiles to deliver supplies as well.

In advance of this next anticipated storm, Supervisor Fowler is urging residents to prepare ahead of time and purchase enough food, water, fuel and supplies to last several days, if necessary. She also urged residents to contact family members if they will be evacuating their homesites so that ICP volunteers aren't needlessly sent out to go check on them.

Supervisor Metzger's office also urged residents to let their chapters know if they would be evacuating their homesites so that concerned family members who call the chapters would be notified of where they're at. She also encouraged community members who have four-wheel drive vehicles to contact the ICP to assist with delivery of supplies. Those with backhoes and bulldozers are also encouraged to contact the ICP to assist with clearing roads.

There is also a need for various supplies to be donated as well as volunteers. Anyone interested in volunteering or donating supplies is asked to call the ICP at (928) 283-1380, or call Supervisor Fowler directly at (928) 606-4733.