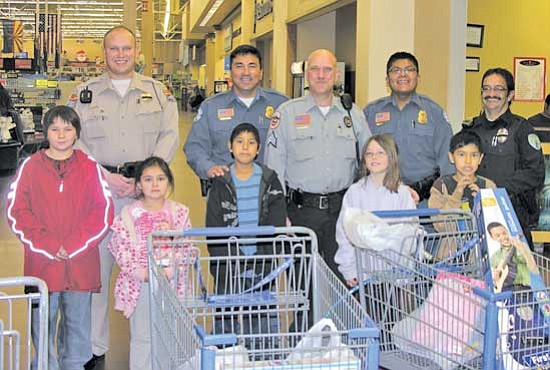 POLACCA, Ariz. - To close the 2009 year in the spirit of giving, the Hopi BIA Law Enforcement Services officers sponsored the onset of a Christmas project called "Shop with a Cop." The event took place at the Wal-Mart Shopping Center in Winslow on Dec. 22. Six students from three elementary schools on the Hopi Reservation were the first to be selected to participate. The selection was made with the assistance of the school administrators. The criterion for selection was based on the student's overall demonstration of good citizenship and academic status.

Each child was given $100, of which half was spent to purchase items for themselves and the other half used to purchase Christmas gifts for their families. Upon arriving to Wal-Mart the group of officers, volunteers and children were given a warm and friendly greeting by Manager Helder Neme. Then each child was paired with an officer or volunteer for their shopping spree.

The "Shop with a Cop" project was coordinated under the leadership of BIA Special Agent Ivan Sidney Jr. Others who assisted with the project were BIA Sergeant Paul Sidney, BIA Officer Troy Poitra, BIA Officer Leenardo Gatewood, and community volunteers Lisa Lomavaya, Carey Onsae and Vanessa Medina, who are employed with the Hopi Health Care Center.

"Police officers employed at Hopi BIA Law Enforcement Services had this idea about five years ago, but unfortunately could not sponsor the activity until this year. With the success of this "Community Oriented Policing Activity," the project will become an annual event and will involve all the elementary schools throughout the Hopi Reservation next Christmas holiday," stated Ivan Sidney, Jr.

When asked what she thought about her shopping trip, Puhuhefvaya stated, "It was fun and nice. It was cool of the people who donated the money to do that for us."

The parents/guardians and family of these children should be very proud of these outstanding students for not only maintaining good grades, but also for demonstrating an outstanding attitude and great behavior in school.

Much appreciation goes to Wal-Mart, Cellular One of Northeastern Arizona, the city of Winslow and all participating law enforcement agencies.