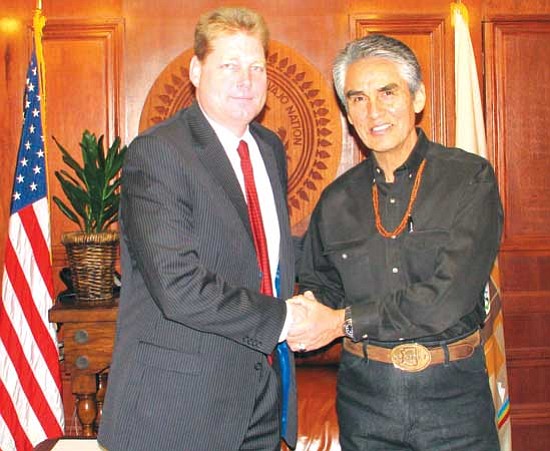 The signing was jointly announced by the Office of the President and Vice President, Navajo Tribal Utility Authority, Foresight Wind Energy, and Edison Mission Group.

The wind project is the first for the Navajo Nation and will pave a new beginning for the Nation in energy development by creating a new business model for sustainable economic development.

The Boquillas Wind project will be located approximately 80 miles west of Flagstaff on ranch lands owned by the Navajo Nation and state trust lands administered by the Arizona State Land Department.

The NTUA will have a majority interest in ownership of the wind project, and will jointly develop and operate the project with Boquillas Wind, LLC, owned by Foresight Wind Energy,

"This is another progressive step for the Navajo Nation, and NTUA is proud to lead this effort," Haase said. "We thank the leadership of the Navajo Nation in granting us the opportunity to build a new economic foundation for the Navajo People. It's an exciting time for NTUA, and we are eager to continue our commitment and dedication to the development and operation of the Big Boquillas Wind project in concert with our partners."

Warren Byrne, president of Foresight Wind Energy and Manager of Boquillas Wind, LLC said he was pleased the project is moving forward.

"On behalf of Foresight Wind Energy and Boquillas Wind, I would like to express our appreciation for the dedication and efforts of many individuals at the Navajo Nation and NTUA that led to this legislation," Byrne said. "This is an important milestone for the project. We look forward to working with NTUA for a very successful project that will create sustainable benefits for the Navajo People."

The project is in mid-development stage, with work under way for wind assessment and other feasibility studies. Final investment and construction decisions by the project team, NTUA and Boquillas, will depend on obtaining permits and a power sale agreement for the project.

The NTUA is a non-profit enterprise established by the Navajo Nation Council to provide multi-utility services to the Navajo Nation and the Navajo People. Since 1959, NTUA has supplied electricity, water, natural gas, wastewater treatment, and photovoltaic (solar power) services to residents throughout the 26,000 square-mile Navajo Nation, which spreads across northeastern Arizona, northwestern New Mexico, and southeastern Utah.

Foresight Wind Energy is a privately held company founded in 2002 with a focus in renewable energy project development in the western U.S. Foresight has established a leading industry presence resulting in a portfolio of over 2,200 MW of wind projects under active development and an additional 2,300 MW of capacity in the early stages of development across the West.

Foresight has been working in wind energy development in Arizona since 2003 and has multiple Arizona projects in various stages of development. Headquartered in San Francisco, Calif., Foresight has a development office in Flagstaff.

Edison Mission Group companies rank as the seventh largest developer of wind energy projects in the U.S. with a current portfolio of 27 wind energy projects capable of producing more than 1,500 MW of electricity in operation or under construction in 10 states. EMG is headquartered in Irvine, Calif., and is a subsidiary of Edison International. Through its operating company, Edison Mission Energy, EMG manages the competitive power generation business of Edison International, an electric power generator and distributor, and an investor in infrastructure and renewable energy projects.