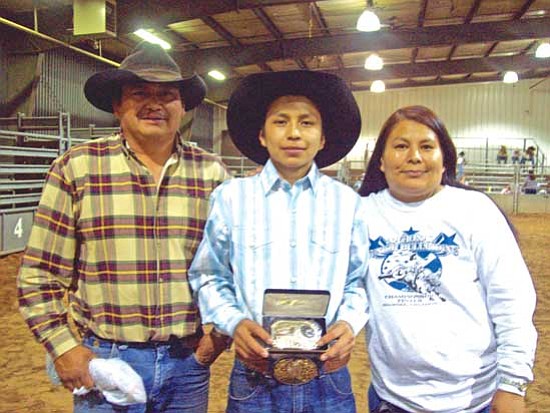 The school hosted a potluck dinner on Dec. 11 with the Puente family to honor Raylando with recognition and words of encouragement. Puente is an eighth grade student, and is also the student council president, a student-athlete and a role model for many students in the school. Puente has been a member of the NJBRA for four years. He was taught by his father and brothers to ride bulls, using a bucking barrel at home.

Puente says he thinks his riding ability runs in his family, since his father, Christopher Puente Sr., was a champion saddle bronc rider when he was in high school. Now all his brothers and one nephew are interested in riding bulls, while his little sister is still riding sheep. Puente says he gets support from a lot of people, his family, friends, sponsors, teachers, and other riders too. He says he is proud to see young Navajo boys and girls win as top riders at the national level and he says he knows it takes a lot of talent to be up there.

His winning ride in Oklahoma was on a bull that is a son of Coyote Ugly of Professional Bull Riders (PBR) Association fame. "He was a showy bull and started hopping right away," said Puente. He was the only rider to ride all three of his assigned bulls for the full eight seconds and scored the most points to win the championship.

Previously in the season, he won a fifth place championship buckle in the Youth Bull Riders Association at the World Finals. When asked how it feels to be a role model, Puente replied, "It feels alright, I guess."

Puente says he wants to keep riding bulls through high school and into bigger events. His advice to others who want to become champion bull riders is to join several riding associations, keep riding, and stay away from drugs and alcohol. "Drugs and alcohol, they will not get you anywhere," he stated confidently.

Puente thanked his sponsors, Way Out West Trail Riders and Mud Light Racing, for supporting him over the years as he rode his way to becoming a champion bull rider and an honored student-athlete.