Life of mine permit for Black Mesa withdrawn 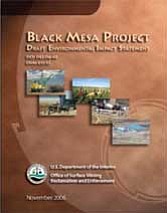 BLACK MESA, Ariz. - Last week, a Department of Interior (DOI) Administrative Law judge withdrew Peabody Coal Company's Life of Mine permit for operations on Black Mesa, handing a major victory to tribal and environmental organizations who had appealed the permit decision in January.

The permit was granted Dec. 22, 2008 by the DOI's Office of Surface Mining (OSM) in an 11th hour decision by the Bush Administration, even after a contingent of Navajo and Hopi tribal members and environmental groups traveled to OSM's Denver, Colorado offices to make a final appeal to either delay or not issue the decision.

The judge vacated the permit in response to one of several appeals filed by Navajo and Hopi residents as well as a coalition of tribal and environmental groups. The permit, issued by the OSM Reclamation and Enforcement allowed Peabody to operate and expand the Black Mesa mine and the Kayenta mine under a single permit beyond 2026 for the remaining portion of an estimated 670 million tons of coal.

The order issued by the judge cited violations of the National Environmental Policy Act (NEPA).

According to Judge Robert G. Holt, "OSM violated NEPA by not preparing a supplemental draft [Environmental Impact Statement] when Peabody changed the proposed action. As a result, the final EIS did not consider a reasonable range of alternatives to the new proposed action, described the wrong environmental baseline, and did not achieve the informed decision-making and meaningful public comment required by NEPA. Because of [this], OSM's decision to issue a revised permit to Peabody must be vacated and remanded to OSM for further action."

The Black Mesa Coal Mine has a long history of controversy stemming from concerns about air and water pollution, impacts to local residents, the drying of aquifers and sacred springs, and coal's contribution to global warming. Heavy metals and pollutants that result from mining operations have been found to be toxic to humans and harmful to wildlife.

Wahleah Johns, co-director of Black Mesa Water Coalition, one of the petitioners in the appeal, issued the following statement: "As a community member of Black Mesa I am grateful for Judge Holt's decision. For 40 years our sacred homelands and people have borne the brunt of coal mining impacts, from relocation to depletion of our only drinking water source. This ruling is an important step towards restorative justice for Indigenous communities who have suffered at the hands of multinational companies like Peabody Energy. This decision is also precedent-setting for all other communities who struggle with the complexities of NEPA laws and OSM procedures in regards to environmental protection. However, we also cannot ignore that irreversible damage of coal mining industries continues on the land, water, air, people and all living things."

Former Hopi Tribal Chairman Benjamin Nuvamsa stated, "The Black Mesa Project EIS was the cornerstone of my campaign because of my concern over the potential impacts to our aquifers and coal resources. I saw language in the draft EIS that would allow for continued pumping of the aquifers despite our past objections. We knew the EIS was flawed because it violated [NEPA], and our people were not given the opportunity to hear what the EIS was about. The Hopi-Tewa people are very leery of Peabody because of past over-pumping of the Navajo Aquifer. We simply needed to make sure our resources and our rights are protected."

"The decision essentially sends the [environmental impact statement] process back to OSM for a do-over" said Nada Talayumptewa, chairwoman of the Hopi Tribal Council's Water and Energy Team. "Mining will continue under the existing permit that covers the Kayenta mine and OSM will now have an opportunity to go back and re-visit the question of how mining operations at both the Black Mesa and Kayenta mines should be permitted in the future."

"This is a huge victory for the communities of Black Mesa impacted by coal mining and proof that Peabody can't have its way on Black Mesa anymore," said Sierra Club's Hertha Woody, also a member of the Navajo Nation. "Coal is a dirty, dangerous and outdated energy source that devastates communities, jeopardizes drinking water and destroys wildlife habitats. This decision is yet another example of why it no longer makes sense to burn coal to get electricity."

"This is a vindication of what we have been saying for years," said Amy Atwood of the Center for Biological Diversity. "As a result of this huge victory, business-as-usual at Black Mesa has come to an end and a transition toward a green energy economy in the Four Corners region can truly begin."

"It is good news that our concerns were heard. Water is very precious that should not be used for coal mining but instead should be used for our people. I am pleased with this outcome," said Calvin Johnson of the grassroots organization C-Aquifer for Diné.

"Diné C.A.R.E. (Citizens Against Ruining our Environment) commends DOI Judge Holt," said Anna Frazier of Diné CARE. "This is a hopeful step toward a better consultation with OSM and other regulatory entities. The ultimate goals for our people and our land are for OSM to withdraw the life of mine permit, as there is no purpose and need for it, to move toward permanent closure of the existing Kayenta Mine and transportation complex and to begin total reclamation on Black Mesa."

Nuvamsa added, "This ruling did not resolve any issues, it just delayed them.  We must now require the new Director of OSM, Joseph Pizarchik, to finally resolve the administrative delay and deny the Black Mesa permit. Secretary [Manuel] Lujan promised in 1990 that the administrative delay would be resolved in a 'reasonable time.' Peabody had many opportunities to get their permit application and subsequent EIS's done right but failed to do so."

"We must now insist the new [Hopi] administration and the tribal council to fully disclose the terms and conditions of the Peabody Lease Reopener that was recently approved by the [Hopi] government," Nuvamsa continued. "[T]he Navajo Nation's council has opened its study and evaluation of their portion of the Lease Reopener to its members - Hopi should do the same."

Legal representation in the appeal was given by the Energy Minerals Law Center attorneys Brad Bartlett and Travis Stills and Atwood, a senior attorney at the Center for Biological Diversity.

(Editor's note: For clarification, out of all suits filed to appeal the Dec. 22, 2008 OSM decision, only one - filed under the name Kendall Nutumya, et. al. (Docket No. DV 2009-4-PR) - was accepted by Judge Robert G. Holt and was used to render his decision.)