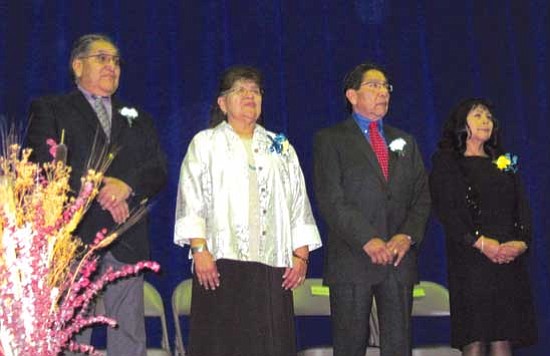 KYKOTSMOVI, Ariz. - It was a day that many Hopis thought wasn't going to come at all.

This past year the Hopi tribal government was a tumultuous, political "hot potato" that had community members questioning whether or not the Hopi Tribe had an "illegal" council in charge of operations and if there was an appointment of an oversight management team that was never fiscally approved.

There were also several very public protests against the council that ended with the arrests of one council representative and one community member, continued delays in getting a formal general election moving, and the greatly attended public political forums once the Hopi campaign became official.

But Jan. 7 finally did arrive and was a day of joyous celebration, not just for the winners of the recent Hopi election, but it was also a day of reinvigorating the Hopi community and a chance to listen to what many feel is a new direction towards overall unity and harmony for the Hopi tribe.

LeRoy Shingoitewa was sworn in by Judge Elbridge Coochise as the new Hopi Tribal Chairman.

He stood before a mixed crowd of well-wishers, family members, relatives and supporters at the Hopi Veteran's Memorial Center. Herman Honanie was also sworn in by Judge Coochise as the new Hopi Tribal Vice Chairman.

Colors were posted by Tuba City High School ROTC Color Guard led by Gunney Sgt. Tim Shaner with the national anthem sung by the current 2009-10 Miss Hopi and her first attendant. A presentation by both Hopi Day School and Moencopi Day school students followed, along with a letter to both Shingoitewa and Honanie that was read by Randy Pullen, Chairman of the Republican party and signed by Arizona Governor Jan Brewer.

After a brief introduction by Master of Ceremonies James Lomakema, University of Arizona representative Karen Begay presented gifts to both new Hopi officers.

In his inaugural speech, Chairman Shingoitewa said, "In 1936, when the first Hopi Council was creating our Hopi constitution and determined that this document would be the roadmap to lead our people, that was an important day in Hopi history. Today, I honor these men of respect. Even my own mother, Mardell Shingoitewa knew I would be standing here today and told me when I was young, 'Because of your clan role, your responsibility is to protect your people. One day it will be your job.'"

Singoitewa added, "When my father was Chairman back in 1941 and 1942, he would always say to us, have integrity, be truthful, be upright, be diligent, be honest and always hope, always dream for those you love. I ask you today, to join me and the new Vice Chairman to hope and dream for our young people. We must have faith in one another. We must truly live Sume-nungwa, Nume-nungwa, let's do it. We must remember that our young people are watching us, we are the example. After today, both the Vice Chairman and I will ask all of you to work with us. I want to thank and recognize many people today, but in particular I want to thank all the Hopi tribal employees who have made our tribal organization function this past year through everything that happened."

Singoitewa concluded, "Thank you for allowing me to be your new Chairman. Today I pledge myself to work for the Hopi and Tewa people, to bring honor and dignity back to our people and our community."

Vice Chairman Honanie also expressed gratitude to his family and community in his speech.

"I want to firstly thank everyone for being here today with us, its a great honor to stand before you. I am hoping to plant the seed for hope and pray for new confidence in our new leadership for our entire community. There are many tribal issues in front of us as your new leadership that will need rectifying, one of which is the Hopi tribal appellate court, there have been many unconstitutional moves this past year by the current council which has caused our current difficult political situation. There are also so many people to recognize and thank today, many of those are family and friends, but I want to especially recognize our Hopi veterans and their families, I want to thank them for their service in protecting our lives and freedom, and their continued dedication to our country. I look forward to stepping up and establishing a positive dialogue with all of our people, our villages, its a new day," he stated.

A final closing prayer was given, as well as a blessing of the day's banquet food, after which both Chairman Shingoitewa and Vice Chairman Honanie received a long line of guests before settling in to enjoy an afternoon of local entertainment with their guests.