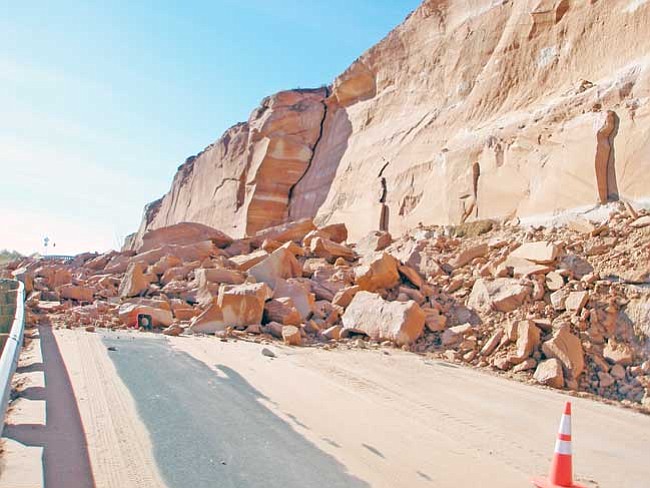 MOENKOPI, Ariz. - Arizona Department of Transportation (ADOT) crews expect to clear all of the debris from Sunday's rock slide on State Route 264 today. Crews will then be able to evaluate how best to repair the road that was damaged by the rock fall. Anticipated work will involve removing some of the roadbed and replacing with new material. There is also guardrail work, which crews will also be working on. All of this work necessitates keeping the roadway closed so that heavy equipment has access to the areas which need to be repaired. If everything goes well, the road may open later this evening.

SR 264 at mile post 323 has been closed since Monday due to a large rock fall that occurred early Sunday morning. The road was blocked by rocks and dirt and was not expected to open until sometime Thursday.

ADOT crews from both the Flagstaff and Holbrook districts worked to break up the large rocks and remove the debris. ADOT brought in a piece of heavy equipment called an excavator, which successfully knocked down the last part of the hillside which was cracked.

The rock slide occurred early Sunday morning with a large rock and some dirt following off of the mountain. ADOT crews were cleaning up the area when they noticed more rocks starting to fall. A short time after ADOT crews were moved to safety, a large section of the hill fell and covered the road. Fortunately, there were no injuries associated with this rock fall.

The leaders of the Moenkopi Village and local law enforcement from both the Navajo and Hopi Tribes have been a great help with traffic control and keeping the local communities informed. We appreciate the patience of the motoring public while we work to open this section of highway. Motorists need to plan on using alternate routes to avoid this area through Thursday.

ADOT has no recommended alternative routes, although local traffic is taking advantage of a few bypass routes. Again, ADOT can only recommend alternate routes which ADOT maintains and has authority over.

One possible bypass route is from Flagstaff east on I-40 to State Route 87, just outside of Winslow, and then north on 87 up to State Route 264. Also, from Tuba City, head east on US 160 to US 191 at Mexican Water, where you can travel south on US 191 down to State Route 264. The local population is using dirt roads to go around the rock fall area. ADOT does not recommend using those roads especially tourists, commercial traffic or anyone else who is unfamiliar with the area.

Future updates will be made as they become available.