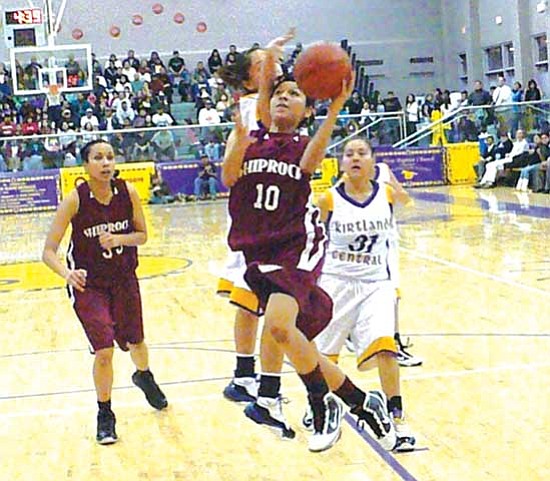 "This is the way it was in 1993 when I came here [as coach of the Lady Chieftains]," reminisced Charles Kromer, now coach of the Lady Broncos, who are the number one ranked girls team in New Mexico 1-4A. "It's back - that Kirtland-Shiprock rivalry is back. I remember fans waiting outside at 10 o'clock in the morning to get into the game."

1-4A Championship game this weekend, including a first round home game of the New Mexico State tournament, beginning in March.

With a win over the weekend, the Lady Chieftains will gain the right to host a first round game, in the upcoming state playoffs.

It was parent night at the Don Cluff Court in Kirtland. When the Lady Broncos finished honoring their parents, senior Amanda Kerr went to work and scored the first two points of the opening quarter. Raquel Woody added a bucket with four minutes left and after a lay-in by the Lady Chieftain's Kalen Henderson, Kerr hit a trey, bringing the sold-out crowd into a frantic eruption. A trip to the charity stripe after a steal by Meghan Yazzie led to an 8-2 run, and all but put the game away early.

During the run, the Chieftains committed 10 turnovers. "I thought our defense was the difference in the ballgame," Kromer said.

Lady Chieftain Coach Brady Rivers stated, "They contested everything. When you contest everything like that, sometimes the girls will be a little bit reluctant to drive in there [the paint]."

"They would get blocked a couple of times, then they pull back or pull up for a jump shot when they should keep going to the basket," he said.

Kirtland led 9 to 6, at the end of the first period.

The second three-ball of the game by Lady Bronco Oliva Harris opened the second quarter. That led to a huge quarter where the Broncos outscored the Chieftains 22 to 15, taking a 31-21 lead at intermission. During the third period, the Chieftains traded buckets, keeping the game close, until a three-ball by Kirtland's Wynonna Jim ignited a 8-0 run, which was then answered by a lay-up by Shiprock's Tessa Begay on a steal off an inbound play.

Kromer talked about the key to the game. "With Shiprock, they are going to press you and to me, the key to the game is not to let them steal the ball and go down and shoot easy layup shots. Make them work for their basket, make them come down and work the half court offense. I felt like in the first half, we gave them two, three breaks on easy baskets."

The Broncos and Chieftains continued to play an up-tempo offense and aggressive defense as they each had a 20-point quarter. The edge went to the hosts, however as the Broncos led 52-41, at the conclusion of the third.

In the final quarter, Shiprock came out with 4 to 2 run with two baskets by Henderson and Christine Yazzie. That effort would be countered by Kirtland's 3 to 2 run on a free throw by Karley Dodge and a driving layup by Meghan Yazzie, extending the Bronco's lead to 57 to 47 with nearly four minutes to play in the game. Kerr, who was 5 of 6 from the charity line in the fourth quarter, initiated a 8 to 6 run with two free throws that led to the final score of 65 to 53.

"I feel like with a crowd like this and the game close like that, the kids showed a lot of class and lot of poise and they just kind of stayed in their ballgame," said Kromer.

Rivers concluded, "It seemed like even when we went on a run and cut it down to about six, they knocked down a three. They would make some clutch shot, so all the credit goes to them."