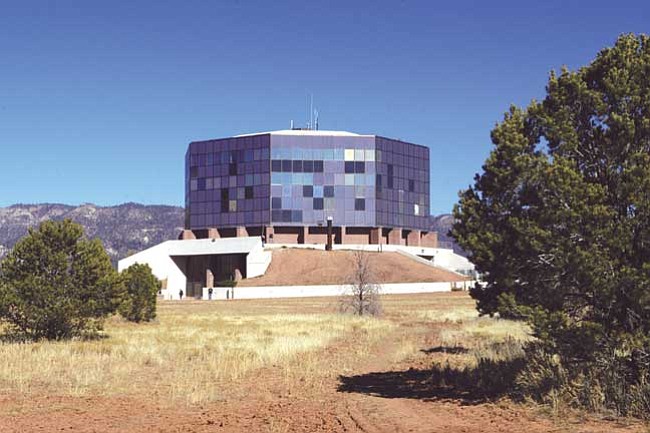 <i>Courtesy photo</i><br> The Ned Hatathli Center, located on the Din&#233; College main campus in Tsaile features a museum with many Native American exhibits as well as authentic Navajo arts and crafts.

WINDOW ROCK, Ariz. - The Education Committee of the 21st Navajo Nation Council received and accepted a report from Georgette Cook, the president of the Associated Students of Diné College, and from other members of the student government requesting intervention on behalf of students from Diné College in matters affecting the school.

The report submitted to the Education Committee requested the support for the removal of members of Diné College Board of Regents. The students were supported by fellow students from Fort Lewis College and San Juan College, who were also present at the meeting.

Council Delegate Willie Tracey Jr. (Ganado/Kinlichee) reminded Cook of her power as a student and a member of the Board of Regents.

"You are a board member and a Board of Regents member," Tracey said. "You have equal powers and opportunity and you have every right to share with us. You have some equal rights to secure information you need."

Cook informed the committee of past attempts to resolve matters with the other Board of Regents at the college.

"We have not heard anything back from the Board of Regents and therefore, we don't have a way to give papers, such as this report to them," Cook said. "When we give papers to the board, they give it to their lawyer and their lawyer's response is not to comment or look at the documents."

"I am pretty sure you, the committee, can understand where we are taking this and what we are doing is what we believe in," Cook added. "The Board of Regents did violate several Navajo Nation Codes, specifically the Navajo Nation Preference Law."

"Mr. Belloli has no more experience then those individuals listed in the report," Cook said. "This list includes six Navajo people who have higher degrees. Mr. Belloli only has a Bachelor's degree. To retain and hire any employee, the Navajo Preference Law says Navajo. Why is a non-Navajo man who has a B.A. chosen over qualified Navajos with PhDs?"

"The Government Services Committee received a report from Diné College staff and that report was given to the Education Committee for fact finding," Seanez explained. "That report was finalized in late December of 2008. The report had a number of recommendations regarding the operation of Diné College, as well as the Board of Regents."

"The committee as well requested and directed monthly reports of the Board relative to actions taken by Board and recommendations by the Education Committee," Seanez added.

"The Education Committee is still maintaining oversight of Diné College. The action taken by Diné College Board of Regents...it may be that if those bylaws are not yet in place that the remaining problems that are appearing today will reoccur until those bylaws are enacted," he concluded.

Council Delegate Leonard Chee (Birdsprings/Leupp/Tolani Lake), former chairman of the Education Committee, said during his tenure as a Board of Regents' member, he never really witnessed encounters such as the current situation between Diné College and its president. He said the situation can be resolved.

"It's sad to hear there are problems there at the college knowing how much time and money has been invested into the college by the tribal council," Chee said. "However, it's not too late for all parties to sit down and resolve those issues. The college is there for students, our culture and language."

Chee also mentioned how it is a matter of the Board of Regents having to work together and listen to the needs of the students and communities as to what is needed in the Navajo educational system.

"If any of that is lacking then there are problems. The Board of Regents needs to know their roles as policy-makers not as administrators," Chee said.

"To me, the college has a lot of potential and a lot of opportunities for the people. Overall, in looking at the Navajo educational systems, there are no problems with our students and learners; it's just that it's those who become Board of Regents and Administrators that make learning difficult for students. As board members and delegates, we owe it to our children to create and establish proper learning environments," Chee added.

Council Delegate Ida Nelson (Red Rock) agreed with Chee's stance on the situation regarding Diné College and expressed the need for presidential interference regarding the Board of Regents because the president is the one who appoints the regents.

"We are the lawmakers and policy-makers and who is the one to intervene?" Nelson questioned. "Where is the President? He is the one who appointed the Board of Regents. We are supposed to have a representative here from the President's office, but that individual is never here."

Cook also mentioned in the beginning of this process, she and other students informed Navajo President Joe Shirley Jr. and his Chief of Staff on the student matters at Diné College because President Shirley is one who appoints the Board of Regent members from the five Navajo Nation Agencies, subject to confirmation by the Education Committee.

"We have written a letter to make the President aware of what his appointees are doing," Cook said. "The day the students and I went to the president's office, he was not there - only Chief of Staff Patrick Sandoval. We informed Sandoval of what's going on and gave him documents and asked for support. Shirley is the one who appoints these positions and doesn't want to take responsibility."

The committee has allowed for the bylaws to be submitted within a 30-day time frame and may consider proposing amendments to the Navajo Nation Code following consideration of the actions taken by the Board of Regents.