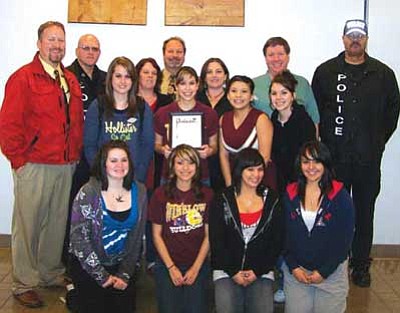 The proclamation, declaring February as Dating Violence Awareness Month, was initiated by Alice's Place because of the prevalence of this issue. It states:

Whereas, dating violence is a reality for many youths, and an issue that many are unaware of, and;

Whereas, 1 in 3 young people are affected by physical, sexual or verbal dating violence, with 1 in 5 in a serious relationship reporting having been slapped, pushed, hit, threatened or coerced by a partner, and breakups can be a time of even greater risk even when a relationship was never physically abusive, and;

Whereas, people can choose better relationships when they understand that healthy relationships are based on respect and learn to identify early warning signs of an abusive relationship, and;

Whereas, elimination of dating violence must be achieved through cooperation of individuals, organizations and communities, and;

Whereas, Dating Violence Awareness Month provides an excellent opportunity for citizens to learn more about preventing dating violence and to show support for the numerous organizations and individuals who provide critical advocacy, services and assistance to victims.

On Feb. 4, with representation from the Winslow Police Department, Winslow High School and Alice's Place, the proclamation was handed over to members of the S-Club, a wonderful service organization at the Winslow High School. The S-Club members plan to dedicate their efforts in spreading the word about dating violence throughout the community and school.

Valentine's Day provided a special opportunity for the club members to pass out "give-aways" to the students. They are also planning events around prom time. Brochures and bookmarks have been provided to the schools for distribution. This important information explains what constitutes a violent relationship and what can be done if one believes they might be involved in one.