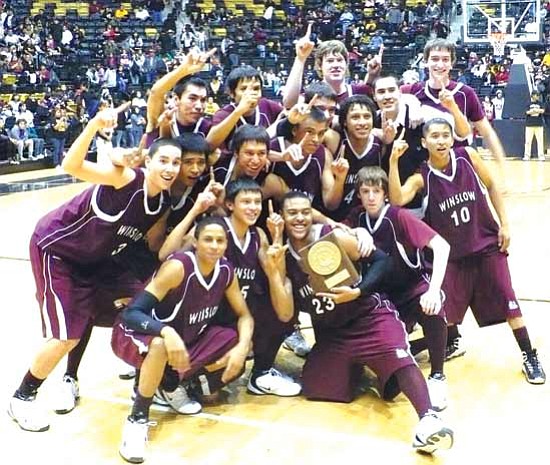 CHINLE, Ariz. - The Winslow Bulldogs and Lady Bulldogs both earned spots in the Championship Games of the 3A North Region Tournament in Chinle with victories on Thursday over the Holbrook Roadrunners and Lady Roadrunners. The Bulldogs were to face Chinle in the boys' tournament after their 60-50 win over Holbrook. Chinle was the regular season champ and defeated Window Rock 71-59 in their semi-final game.

The Lady Bulldogs were to meet the Window Rock Lady Scouts in the Championship Game after their 57-48 win over Holbrook. Window Rock cruised by Tuba City 57-27 in their semi-final match.

The Winslow Lady Bulldogs defeated the Holbrook Lady Roadrunners 57-48 in the semi-finals of the 3A North Region Tournament at Chinle on Thursday. The win left Winslow with a record of 22-5 going into the title game against Window Rock on Friday. Window Rock defeated Tuba City handily 57-27 to earn its spot in the Championship Game.

The Lady Roadrunners need a win against Tuba City on Friday to assure them of a berth in the state tournament.

Winslow had a narrow 10-7 lead after the first quarter and was still up by that three point margin 21-18 at the half. The lead was expanded to 37-30 in the third quarter.

Samantha Yazzie with 12 points and Aaren Billie with 10 points were in double figures for the Lady Roadrunners who had nine players in the scoring column to only six for Winslow.

In the boys' semi-final, the Winslow Bulldogs defeated the Holbrook Roadrunners 60-50 on Thursday. The win left Winslow with a record of 25-5 going into the title game against Chinle on Friday.

Lakota Shirley led all scorers with 16 points for the Bulldogs. Jevon Estelle with 11 points and Kraig Shirley with 10 points were also in double figures for Winslow. Dale Dixon scored nine points for the victors.

Adrian Sandoval led Holbrook with 10 points. The Roadrunners had more players score with nine to Winslow's seven but only Sandoval in double figures.