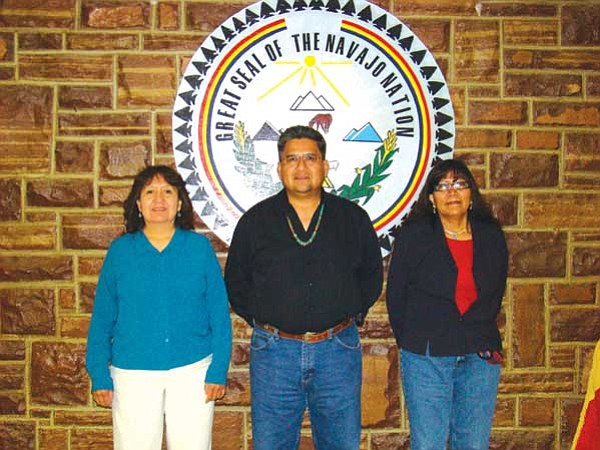 <i>Courtesy photo</i><br> Kayenta Chapter officials recently celebrated the lifting of sanctions imposed against them in 2004 following an audit of their financial records. Sanctions were imposed against the chapter due to the lack of an appropriate fiscal management system as required by the Navajo Nation.

KAYENTA, Ariz. - Auditor General Representative Beverly Tom reported to the Budget and Finance Committee earlier this month that after a week-long audit of Kayenta Chapter financial records, it is their observation that the chapter had successfully implemented corrective action plan and have accomplished all requirements to have sanctions lifted.

In 2004, the Navajo Nation Auditor General imposed sanctions upon the Kayenta Chapter due to the lack of an appropriate fiscal management system as required by the Navajo Nation and for a lack of proper record keeping.

"It is a momentous occasion that you should be proud of and a celebration with your community is in order," said Jonathan Nez, Finance Committee member and Navajo County Supervisor. "You have worked hard to reorganize your chapter and now you are a model to other chapters that this can be accomplished," he said.

Kayenta Chapter membership replaced their elected officials in 2008 with a new group that campaigned on the platform of change for the chapter. These officials, who have just completed their first year in office, have indeed ushered quick change.

"We have a great group of people that work with this new administration and we have accomplished a lot this past year. We have devised a strategic plan for the chapter, which includes getting our land use plan certified, Five Management System certified, and of course lifting of the ... sanction status," said Chapter President Stanley Clitso.

"We have a specific duty to the people of this community to support their dreams of becoming a chapter unlike any on the Navajo Nation; a chapter on the right path to self sustainability and this is possible," Clisto said.

The Chapter has contracted with Nahata Consulting, a Kayenta based consulting firm that has provided technical support to the chapter for nearly a year and has been instrumental in helping implement chapter goals and objectives according to chapter officials. "We have not had this sort of help before ... [I]t has been hard to move towards implementing the corrective action plan as mandated by the auditor, not to mention even attempting LGA certification," said Clitso.

"These are the types of results that every sanctioned chapter hopes for - to be out of fiscal injunction and into a new phase of community development. Check it off the chapter's to-do list and move on to the next item, because the potential of a chapter like Kayenta is unlimited and time is of the essence. The chapter must make clever and careful decisions from this point onward," said James Nez, CEO of Nahata Consulting.

"The chapter has reestablished vital standing committees to address public interests and is finalizing its land use plan and FMS for certification by Transportation and Community Development Committee," said Clitso.

One interesting fact that demonstrates the acceleration of Kayenta Chapter is the implementation of the non-profit accounting software MIP by Sage.

"We will be one of the first chapters using this software while going up for LGA certification," said Clitso.

"We want to be innovative and competitive in this economy and by being technologically up-to-date we stand a chance in making other chapter ventures a reality," said Clitso. "I would like to thank my staff, my fellow officials Vice-President Ruth Gilmore and Secretary/Treasurer Lenora Spencer, our consultant, the Auditor General's Office, Fort Defiance LGSC, and the Budget and Finance Committee for helping Kayenta Chapter exit out of sanction status. I would also like to pay special thanks to the community members of Kayenta for being so patient in enduring the long process, Ahe'hee," commented President Clitso.