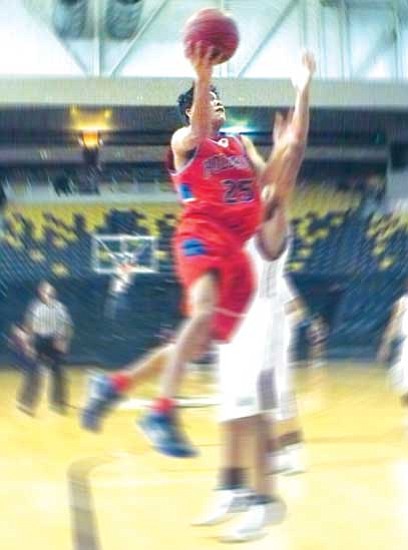 CHINLE, Ariz. - Three boys and girls teams from the Arizona 3A North Region Basketball Tournament assured themselves a spot in the 2010 AIA 3A State Basketball sweet 16 tournament that began Monday, Feb. 15. Not finishing in the top 16 meant the season was over, unless teams were fortunate enough to finish in the top three.

One such team was the Holbrook Lady Road Runners (19-11). With nothing to lose and everything to gain, they had a mission. The mission was to win two games and they did. First they defeated the defending 2009 Arizona State Champion Monument Valley Lady Mustangs (18-7), 73 to 63. Then they suffered a loss to the eventual champions, the Winslow Lady Bulldogs (23-5), 57 to 48. In the third place game, the Lady Roadrunners defeated the Tuba City Lady Warriors (13-14), 48 to 26. Mission accomplished.

The Holbrook boys team (19-11) qualified through the state's power rankings and played only to improve their ranking, with victories. In the first round, they defeated the Monument Valley Mustangs (12-11) 73 to 63 and were also beaten by the Winslow Bulldogs (26-5), 60-50. They claimed the third place trophy by defeating the Window Rock Scouts (21-7), 74 to 62.

All four teams - the Holbrook boys and girls team, the Window Rock Scouts and the Tuba City Lady Warriors will advance to the first round of the 2010 AIA Arizona 3A State Basketball sweet 16 tournament.

After playing an even opening quarter, the Holbrook Roadrunners clinched a one point lead, 22 to 21 into the second frame. The Roadrunners hit shots beyond the arc, hitting a total of seven treys in the first half. When that wasn't working they went to the inside game.

"We moved the ball well and hit the open men. I think Tyler Stingley did a real good job inside. When he got the double team, he dumped it off to an open man. That's a sign of a good team effort," said Holbrook Coach Raul Mendoza.

"It was hard to get started. Playing a late game the night before, we started out slow and it [took] us a long time to get in the flow of things and we just missed a lot of opportunities," said Window Rock Scouts Head Coach Gil Clauschee.

He added, "We usually get to play a zone defense, but we played manned defense to prevent the [treys]. The guys weren't getting down on their shooters, and they made their threes."

Holbrook led at intermission by a 45 to 31 score.

Mendoza talked about the first half action. "Basically, we wanted to make sure that we didn't allow penetration, but they still did and finally we made the adjustment that was our biggest concern."

Clauschee's concern was defense. "Our defense wasn't there. We weren't getting out on our shooters and not boxing out and they were getting second shots. We worked hard on defense at the half. We told the kids to be more intense on defense and relax, not to press so much. We had to get more kids in because of fatigue."

Window Rock made a run in the final quarter, tallying 12 points while Holbrook scored eight points and going on to win the third place game by a score of 74 to 62.

"Anytime you win that's nice, but we got some things to work on to get ready for the post season," commented Mendoza.

Stingley finished with a game high 23 points, while Jackson and Sandoval added 14 points each.

"The kids gave it their best effort and I'm happy with that," Clauschee said. The Scouts were led in scoring by Kyler Ashley with 14 points, followed by Ote Manson with 13 points and Todd Perkins added 11 points.

The Holbrook Lady Roadrunners opened up the game with 11 points behind Amanda Chee, Aaron Billie, Sheria Billie, Shantina Kinlicheene and Nicole Baldwin. The Tuba City Lady Warriors in the meantime got six points from Angel Tacheene, Stacy Claw and Unique Byars in the first quarter. Holbrook outscored Tuba City 16 to 9 to take a halftime lead, 27 to 15.

"The girls just stayed with it mentally. We didn't play very well offensively the first half, but defensively we were ok," said Grey Perkins, Lady Roadrunners coach, who was voted the 2009 - 2010 Co-coach of the Year for the Arizona 3A Girls North Region.

He continued, "At the half, I told them, 'We've got to win the game with more defense. Offense will take care of itself as long as we move.' The young girls came off the bench when our starters didn't get the job done early. I put in five new girls in the middle of the third quarter and they got the job done."

Danielle Tapaha led the Lady Roadrunners with 10 points and Stacy Claw led the way for the Lady Warriors, with seven points.