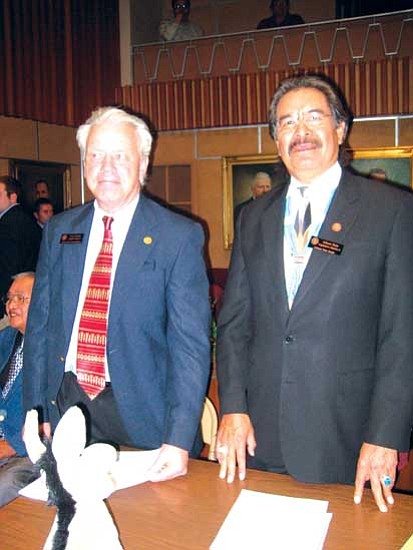 PHOENIX, Ariz. - Arizona State Rep. Tom Chabin, a Flagstaff Democrat, said the state is facing an economic crisis that could result in 30,000 teachers getting laid off.

The Arizona legislature on Feb. 4 approved sending a proposed temporary state sales tax increase to voters for a May 18 election.

"We are facing a genuine crisis. Even if the state fired all of its employees we would face a $700 million deficit by July," he said.

Chabin represents the district that includes the Hopi Tribe and a large part of the Navajo Nation.

Chabin said that the new tax, if approved, would raise $1 billion for the 2011 fiscal year, but leave a $2.4 billion deficit, so "it's only part of the answer." He added that the larger answer is new revenue streams which the legislature is considering including giving more control to local school boards, expanding the tax on alcohol and borrowing from the state lottery.

Unlike last year's legislative session, there is a bipartisan "stealth budget" floating around this year that would address the budget deficit crisis. Chabin said passage of the stealth budget would need a two-thirds vote of the state legislature and he thinks numerous portions of it would be hard to pass. The stealth budget is pushed by Republican Bill Koponicki and Democrat Chad Campbell as well as an economist from Arizona State University.

The stealth budget is just one example of how Republicans and Democrats are starting to work together this session after partisan bickering dominated last year's session.

Chabin voted for the measure even though he had reservations because he felt it was only a band-aid approach. Arizona State Sen. Albert Hale also voted to send the measure to the voters while Rep. Chris Descheney voted against it.

Some Hopis are upset that the deficit will cause Homolovi State Park to close. Many throughout the state are protesting that several state parks will close due to the deficit. Those parks set for closing include Riordan State Park in Flagstaff. One proposal in the state legislature would charge motorists an additional fee for their license in order to fund the parks.

Chabin said he was offended when the state swept $120 million from state park fees that were meant for the operation of the state parks, but the state used it to help balance the deficit.

Chabin said the pending closure of many state parks is just part of a larger problem.

"If we don't balance the budget, if we have a $2 billion deficit, then half the funding cuts will come from education and that could mean the loss of 30,000 teaching jobs," he said.

Chabin said the budget deficit could mean the loss of 450 police officers in Phoenix, 100 in Tucson and 25 in Flagstaff. The state has also cutoff 45,000 people from psychological medication.

"The state is cutting teachers and police, then they take away medication from people that will stabilize them. The legislature has to be nuts to make these recommendations," he said.

The proposal going to the voters would direct two-thirds to education and the rest to health care and public safety, but Chabin said this doesn't mean these areas won't face cutbacks because the deficit goes deeper than that.

Chabin, along with his fellow Democrats, have called for expanding the tax-base to include services, which currently aren't taxed.

Chabin plans to seek re-election, but will have lots of company for the two House seats in the district. Sen. Albert Hale is term-limited from the Senate and will run for the House. Former Arizona Rep. Albert Tom will also run along with educator Pat Carr.

Two candidates who have shown an interest in running for Hale's state Senate seat are Gloria Showalter and Sylvia Laughter.