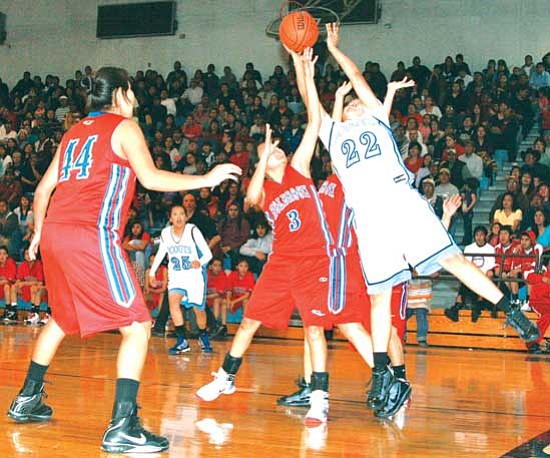 <i>Photo courtesy of Goose Elliott, WRSD</i><br> Window Rock's Ashley Mitchel (22) goes up for a layup with Holbrook's Samantha Yazzie (3) defending. The Lady Scouts defeated the Lady Road Runners with a final score of 63 to 49.

FORT DEFIANCE, Ariz. - The Window Rock Scouts (10-13, 7-5) closed out their regular season with two victories over the Holbrook Roadrunners at the Field House on Saturday. The boys were 81 to 65 winners while the Lady Scouts (19-5, 11-1) defeated the Lady Roadrunners 63 to 49.

Outside the Window Rock High Field House, it was cold and snowy, but inside, the capacity crowd was treated to hot basketball action. After the opening quarter ended, it was 16-all.

Seven different Scouts scored in the first half. Leading the way was Todd Perkins with 11 points, including three treys. He was followed by Dominique Dale with eight points. The Roadrunners were led by Kory Koeperich with 15 points - all three pointers - and Tyler Stingley with 12 points as the visitors trailed 37-34 at intermission.

Window Rock assistant coach Tim Arviso talked about the first two quarters, stating, "In the first quarter, they were shooting the three-ball very well, so at the end of the quarter and into the second quarter, we switched to a manned defense and we shut them down, and that made a big difference in the game."

Control of the second half belonged to the Scouts, who were aided by the crowd. The game was tied at 39 early in the third and the Scouts led by as many as eight points, 50 to 42 and 58 to 50 at the end of the third frame. Kyler Ashley and Perkins had 14 points and 10 points respectively and led the second half in scoring, most points coming in the paint. The Scouts extended their lead to 16 points on three occasions; the last one was when the game concluded.

Arviso talked about the team's offense. "Offensively we were very patient. We moved the ball around looking for our inside guys. Once we got ball inside, that opened a lot of lanes for us and everybody stepped up. We got balancde scoring, including from our bench and especially our freshmen. They are playing like seasoned juniors - right now, we were the zone."

The Scouts were led in scoring by Todd Perkins with a game high 21 points, followed by Kyler Ashley with 16 points, Dominique Dale and Jay-Diamond Taliman added 12 points each.

"Coming in, we wanted to stop the penetration. They got good guards and they penetrate [and] pass the ball well. We wanted to make them work hard and we didn't do a good job," said Raul Mendoza, head coach of the Roadrunners. "They hurt us. They got good looks and got good shots, and their shots were falling."

Mendoza continued, "We didn't do our job defensively. We made defensive mistakes and down the stretch we didn't hit the shots we wanted to hit and that was the difference in the game."

The Roadrunners were led in scoring by Adrian Sandoval and Kory Koeperich with 15 points each. Jalen Jackson and Tyler Stingley had 14 points each.

The Window Rock Lady Scouts were enjoying one of their better seasons when they were stunned by the Lady Warriors of Tuba City and lost their first regional contest. That loss, however, ignited a new run - and just in time with a state tournament on the horizon.

"It was a good win. I wanted them to come out with intensity and play high pressure Window Rock basketball - to play tough defense and run, communicate, stick together as a team no matter what," said Window Rock Coach Charles Chong. "They did that and fortunately, we ended up on top."

From the opening tip through the end of the first half, numerous Lady Scouts were on a mission to regain their winning ways. Seven different players got in the scoring column led by Caresse Davis, who started the quarter with three points and was in a midst of a 9-0 run that pushed the lead to 26-17. They ended the half on a good note, 30-22.

Coach Chong said, "The girls kicked it into gear and there was no stopping them that was really impressive tonight."

Ten points by Amanda Chee fueled a third quarter rally for the Lady Roadrunners, who cut into the lead. That rally was quickly halted with eight points coming from Cheyenne Begaye who said, "I just kept driving and putting up shots because the coach said to bring up the intensity level."

The third period ended with a six point advantage for the lady Scouts, 46-40.

With one quarter left in their season, the Scouts "put into fourth gear" according to coach Chong, outscoring the Roadrunners 17 to 9 and finishing with a final score of 63-49.

"One thing I've been emphasizing with the girls was poise, whether they are up or down by 20, to keep their head and play the next play smart and play it hard, making good decisions and play with our heart. We are ready to play in first round of the state tournament, no matter who we play."

Cheyenne Begaye led all game scorers with 18 points, followed by Violet Wood with 13 points and Ashley Mitchell added 10 points for the Lady Scouts.

April Lester had a team high 17 points and Amanda Chee contributed 10 points for the Lady Roadrunners.