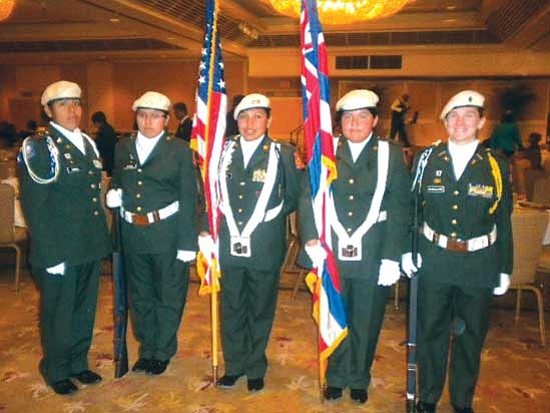 HONOLULU, Hawaii - For the Hopi High School Junior Reserve Officer Training Corps (JROTC), the Fourth Annual Hopi2Hawaii trip was an absolutely fun, lifetime experience - and it was warm. While there were severe snowstorms on the Hopi Reservation, it was in the 80 degree range in Honolulu, Hawaii.

The cadets started their trip off in the early morning of Jan. 14. The cadets gathered in the Hopi High School JROTC classroom at around 11 p.m. the previous night before heading down to Phoenix for their 8 a.m. flight to Honolulu.

They boarded the Bruin bus at exactly 12:30 a.m. on the morning of Jan. 14. After stopping in Anthem to grab a quick bite to eat, they got to the airport at around 7 a.m. and went through security and bag services. They then boarded the plane and were on their way to Hawaii.

The six-hour flight was exciting and definitely an experience for those who never went to Hawaii, much less been on an airplane before.

Cadet Private First Class Brandi Navenma stated, "The plane flight was very long but I used my six hours of time to read books, and do some of my homework." She also added that she listened to her music player.

The cadets arrived in Honolulu at 11:30 a.m. Jan. 14, which is 2:30 p.m. here in Arizona. They got their baggage and rode on the Army Transportation bus, which took them to their lodges. The cadets stayed on the Tripler Army Medical Center. They had the rest of the day to settle in to their rooms and get things together.

The cadets were all amazed and happy to be at a place that holds so much history. When they were done, they headed back to their lodges to change into civilian attire and made their way down to the Polynesian Cultural Center where they spent the rest of their day enjoying the different festivities. It is basically is a way of showing tourists and newcomers all the different Hawaii cultures and celebrations. They show different dances, rituals, and entertainment. The cadets' day ended around 9 p.m.

On Jan. 16, the cadets rose early and traveled to the naval base, which was an hour away from their lodges. When they got there, they ate breakfast and met with the other cadets from the high schools that were participating in the Pearl Harbor Challenge that day. They got to know each other before the challenges started at 8 a.m. The challenges were to test both physical and personal strength.

"The best part of the Pearl Harbor Challenge was doing the obstacle course. I didn't really like doing the push-ups though, because that's what burned me out the most," said Cadet Major Whitney Damgaard.

The Pearl Harbor challenge took place during the day and it was in the high 80s, which was the perfect weather for the cadets. The cadets were pumped and ready to go compete for the victory. The Pearl Harbor challenge was a friendly competition between high school JROTC programs. There were over 20 high schools from different areas that competed in these competitions, which lasted until around 1:30 p.m.

When the competitions were over, the cadets had the rest of the day to do anything of their choice, so they chose to go shopping at the local mall. They shopped and browsed for about three hours. After grabbing a bite to eat, they headed back to the lodges.

Later that evening, the Honor Guard was scheduled to post the colors for the NAACP banquet, downtown. The Honor Guard members started their way to the banquet at around 5:15 p.m. and got there at around 5:45 p.m. The banquet started at 6 p.m. and that gave the cadets just enough time to get ready. Cadet Captain Wendy Koinva was commanding and calling cadence. Cadet Command Sergeant Major Amber Naha was carrying the National Flag, while Cadet Private First Class Gabrielle Tovar carried the Hawaii State Flag. Cadet Major Whitney Damgaard was the first rifle barrier and Cadet Private First Class Brandi Navenma was the second rifle barrier.

"The cadets did a good job, and it was fun doing the NAACP Banquet," said Cadet Captain Koinva.

The honor guard members stopped by other places to see downtown Waikiki, and had a good time browsing. They then returned to the lodges where everybody else remained and did homework or practiced their dance.

On Jan. 17, the day was spent with the Waianae High School's JROTC program. The hosts shared cultural possessions and enjoyed friendly competitions with each other. They also did a cultural exchange. They spent their entire day there on the beach interacting with them. They all had a good time and got to know a lot of cool Hawaiians. Even though they live way over here in Arizona, they made friends over there.

"The cultural exchange was fun. I had a lot of fun meeting up with the old cadets that were there last year. I learned a lot from the Hawaiian culture and I enjoyed watching the dances and performances they did," said Cadet Lieutenant Colonel Dominique Halwood.

After a fun day in Waianae, they made their way back to the lodges where they spent the rest of their day just hanging out, doing homework, and practicing their dance for the next day.

Monday was a big day for the cadets. For them it was parade day, and the day to perform their traditional Buffalo Dance in Kapi'olani Park. They performed for the onlookers and other performers.

The parade was in recognition of Dr. Martin Luther King Jr. and his accomplishments and successful work. The parade started at Ala Moana Park around 9 a.m. It was three miles long and went through downtown Waikiki and ended at Kapi'olani Park at 11 a.m.

The Bruin Battalion, followed by the Bruin Honor Guard, was very confident in chanting and marching the whole three miles. They were excited and hyped to do it.

"The parade was fun, because it was long, and I was surprised that I didn't get tired," said Cadet Command Sergeant Major Amber Naha.

The Bruin Battalion was led by Cadet Captain Waukere Joe and Cadet Captain Carrie Jones. They chanted the "1 through 7," "I get a line," "Batman," "Hey Hopi,"

Downtown Waikiki was amazed and very pleased as to how well the Hopi JROTC cadets presented themselves, their school, and the JROTC program at Hopi High School.

The Waianae High School JROTC cadets cheered on their fellow friends from Hopi High School. They cheered, rooted, and applauded to all the chants the cadets performed while marching.

To read the rest of this article, visit our Web site and click on the "Education" link.

Following the parade, they quickly changed into their traditional clothing and performed their Buffalo dance shortly after 2 p.m. They then ate dinner there and got a chance to browse around at the stands that were at the park. Some cadets were allowed to go swimming since the park was close to the ocean, and others were allowed to watch the other performers.

Tuesday was a day planned for touring and sightseeing. The cadets as well as the chaperones were all happy to go on the island tour of Hawaii. They saw different elements and special sights. They took their tour all the way around the island, occasionally stopping to buy souvenirs and take pictures.

When their tour was over with, everyone headed to Dave and Busters for a fun night from NAACP. The NAACP paid for the cadets for a night of dinner and playing games. The cadets enjoyed the games and dinner, so a special thanks goes out to the NAACP association. They are part of the main reason why the Hopi JROTC program goes to Hawaii and for them to become so involved with us here on the Hopi Reservation.

The day ended with them returning back to the lodges at around 8 p.m.

The cadets spent the next day at the zoo watching natures wonderful animals be. They were there for two hours and later traveled to the Swap Meet at the Aloha Stadium. They spent several hours there browsing, getting discounts, and shopping for their families.

On Thursday, They headed back to visit the naval base once more before their trip back home. They had a scheduled tour which lasted about two hours. The cadets left the base at 11:30 p.m. and made a final stop at the USS Arizona Memorial one last time before their flight back. They got to travel to the Memorial Center, where there was actually a sunken ship that was still viewable. They traveled by boat and were all excited and happy to travel there once again.

When they finished their time at the USS Memorial Canter, they grabbed a bite to eat and then headed to the airport for their 3 p.m. flight back to Phoenix.

They spent the rest of their time going through security and boarded the plane at around 3:05 p.m. and arrived in Phoenix at 11:59 p.m. They came back towards Hopi reservation quickly after their flight arrived and actually meant to return to Keams Canyon at 7 a.m. Friday morning, but they had a delay in bus transportation back home due to I-17 and I-40 being closed due to hazardous road conditions. Turns out, there was a huge winter storm that caused a lot of trouble for drivers, and caused the cadets to remain in Phoenix for two extra days.

The cadets spent their time in Phoenix watching movies and catching up on rest. The 6-hour flight caused the cadets to be tired.

Overall, the Hopi2Hawaii trip was fun and very exciting for all the cadets, and chaperones. It was definitely a life learning experience and for all of the cadets, and they say they would go back.

A special thanks goes out to all the supporters of the JROTC program and the possibility of making this trip possible.