Scouts take the sting out of final game for Hornets 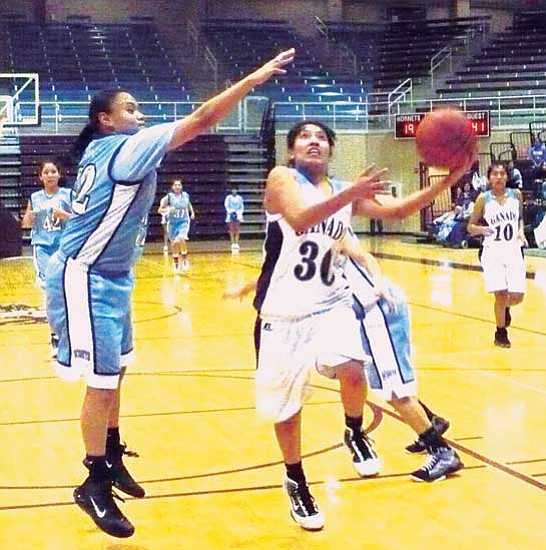 <i>Anton Wero/NHO</i><br> Ganado's Jasmine Taliman (30) drives the paint for two points as she is defended by Window Rock's LaCresha Campbell's (32). The Lady Scouts won an important 3A region win over the Lady Hornets with a final score of 55 to 46.

GANADO, Ariz. - For those seniors who played their last home game for the Ganado Hornets, their memories will encompass the night the Window Rock Scouts came calling. Unfortunately, the Ganado Hornets Pavilion was left less celebrative as the Scouts claimed two road wins. In boys action, the Scouts (8-13, 5-5) outlasted the Hornets (5-17, 2-9) to win by a score of 80 to 69. The Lady Scouts (18-4, 10-0) continued to roll along with a convincing 55 to 46 win over the Lady Hornets (7-13, 2-9).

Defense was the name of the game for the Window Rock Scouts, "Our plan was to pick up on our defensive play, one to focus on Marcus Begay who is having a great year. We want to hold him below his season scoring average and it turned out very well" said Assistant Coach Tim Arviso. "Our defensive effort was the key to our win."

Scoring from six Hornets - Riley Benward, Travis James, Armondo Cervantes, Sherwin Hale, Marcus Begay and Levi Tsinnijinnie - opened the first quarter as they combined for 23 points, while the trio of Ote Manson, Otis Henderson, and Todd Perkins answered with 17 points for the Scouts. Perkins had two treys in the quarter, one an NBA three pointer that got the Scouts going with over two minutes gone. The Hornets led 23 to 17.

During the first quarter break, Arviso said, "We told the kids to pick up the pace, switch to a full court manned defense. With this defense, we forced turnovers, which results in easy baskets and a momentum swing."

With the momentum in hand, Dominique Dale and Henderson opened the second quarter with a 10-0 run for the Scouts. But the Hornets' Cervantes fired a full court bullet pass to Taime Dennison who broke free for a easy lay up of their own and cut into the Scout's lead, 27 to 25. The Hornets and Scouts traded baskets through intermission with the visitors still in control, 42-37.

The Scouts outscored the Hornets 17 to 14, in the third frame behind Jay-Diamond Taliman's eight points. Ganado's Begay, who was held scoreless in the second quarter, finally scored on a bucket plus three free throws. When the quarter ended, the Scouts led by eight points, 59 to 51.

A mini run of 6 to 2 by the Scouts in the final quarter, increased the margin to 13 points. With the fifth three pointer of the game by Kyler Ashley, the Scouts had their biggest lead of the game - 16 points. This trey all but put the game in the win column. The Hornets finished on a good note with a six point push, and as time ran out, the scoreboard showed a score 80 to 69 score in favor of the Scouts.

Ote Manson led the Scouts with 19 points, followed by Jay-Diamond Taliman and Todd Perkins with 13 points.

Ganado's Head Coach Nathan Brady commented, "There was no fundamentals on the floor. We had too many mental mistakes."

The Hornets were led by Sherwin Hale with a game high 23 points; Armondo Cervantes added 16 points and Marcus Begay was held to 10 points for the game.

"We wanted to come out strong and I think we did that. We had a tough game and pulled out a road win at Winslow and we wanted to keep the momentum going. We're trying to get in a groove for the post season," said Charles Chong, the Lady Scout's head coach. "We are not a team that can let up, we have to keep pushing and get better."

Peterson Butler, head coach for the Lady Hornets talked about their slow start, stating, "We didn't have the intensity from the beginning. That's what we needed. We didn't have the confidence, and we were intimidated early."

Window Rock outscored Ganado midway though the second quarter with 8-0 run, taking a 25 to 11 lead and coasting easily to a 29-15 halftime lead.

The third quarter belonged to the Lady Scouts as they stretched the lead to 22 points with four minutes left in the quarter on Clark's three pointer and Wood's two from the charity stripe. With the teams trading buckets, the crowd went into a long awaited frenzy when Lady Hornet Roanhorse hit a trey. With time winding down, the Hornets were still down 19 points, 43-24.

"We progressed through the first three quarters and when we got to the final quarter, they finally got aggressive. They finally realized we can score on them [and] can play with them. Our confidence level that had been low, was now up," said Butler. The Lady Hornets, behind Salabiye's eight points, outscored the Lady Scouts 22 to 12, in the final quarter.

"The key tonight was the intensity. It was off and on; it was a good win," said Chong. "We wanted to carve out a groove for ourselves so that we keep in the right state of mind going into the post season."

"Tonight we came with an opportunity to win a game. We worked on the confidence part, getting them to believe in themselves, trying to make them realize they can beat Window Rock," Butler said. "Now, we need to win one of the two remaining games to make it to the state tournament."