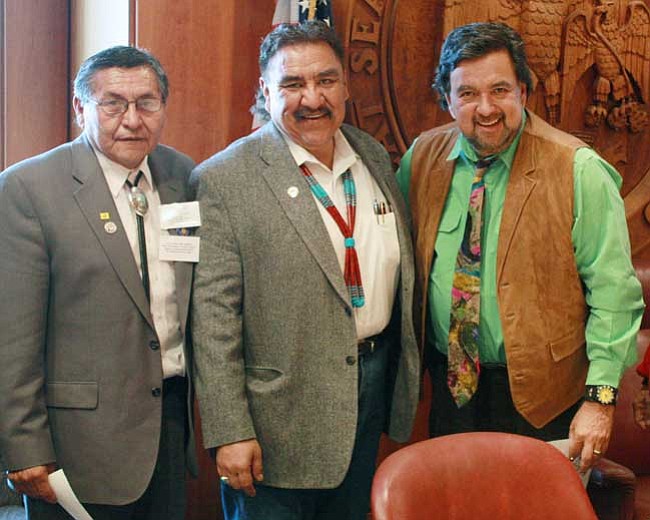 For months, the two tribal leaders and their offices have worked together to deliver suggestions and plans to the New Mexico State Legislature.

Their visit to the state legislature solidified their partnership to put Navajo people first.

With the support of the Intergovernmental Relations Committee of the 21st Navajo Nation Council -- the only governmental entity able to establish official positions of the Navajo Nation -- Speaker Morgan and Vice President Shelly lobbied the state legislature and the state's leadership.

Speaker Morgan thanked Gov. Bill Richardson for his support of the Navajo Nation during his tenure as governor.

"As Governor, you helped to provide the Navajo Nation with capital outlay funds," Speaker Morgan said. "You helped to create the Indian Affairs Department, the Tribal Infrastructure Fund and helped to initiate the State Tribal Collaboration Act - we are thankful for your support."

Speaker Morgan also thanked the Governor and the state legislature for creating permanent funding for the Tribal Infrastructure Fund, which has become an important legislative priority in the 2010 session.

"The state's leadership needs to understand that the Navajo Nation is unique. Our projects are not like other local government projects - like county and city projects," Morgan said. "Our projects are not designed to beautify buildings or what not. Our Navajo projects are projects that are for survival of our people, to satisfy our basic needs. That is what we call putting people first and we will continue fighting for their basic needs."

"It is very important that we speak in unity to save vital projects for the Navajo people," Speaker Morgan added. "It is also important we work closely with the state legislators to save these projects."

"Please be mindful of the need on the Navajo Nation when exercising veto power in SB 182," Morgan said. "The need is great for infrastructure. Each project is essential and valued in the effected communities. We cannot afford to walk away from the appropriated state funds."

"I am aware of SB 182 and that several Navajo projects will be taken out," Richardson said. "We worked on that, we are trying to find funds, so we can preserve them. My main message in regards to Capital Outlay Funds is spend that money. Don't sit on it, it makes these projects vulnerable."