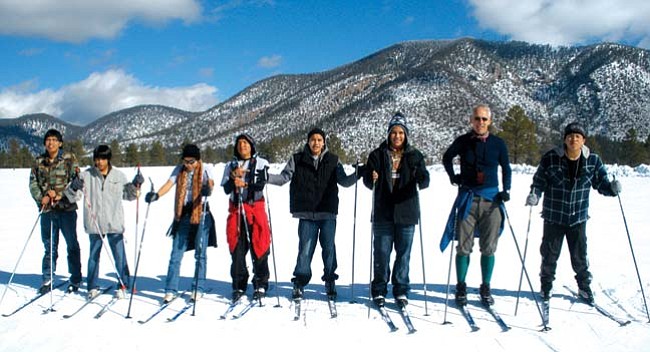 Members of the Holbrook High School Running Club took advantage of the recent heavy snows and traveled to Flagstaff to cross train on cross country skis.

As well as being an aerobic exercise, the students challenged themselves with some downhill runs and enjoyed a game of rugby (with greatly modified rules for the snow). The club meets two days a week after school. Students riding the activity buses hang out in the sponsor's classroom, where they eat granola bars, work on homework (math is emphasized, since the sponsor teaches math), or just socialize.

Once a month, there's a lunchtime meeting of the club to decide on an off-campus event. These range from running trails in the National Forests or National Parks to backpacking in some remote areas, often in the Grand Canyon. In the warmer months, members favor finding a run that ends at a swimming hole.

The HHS Running Club conducts fundraisers and seeks tax credit donations to pay for all of its expenses and is open to anyone interested in running for fitness or enjoyment.