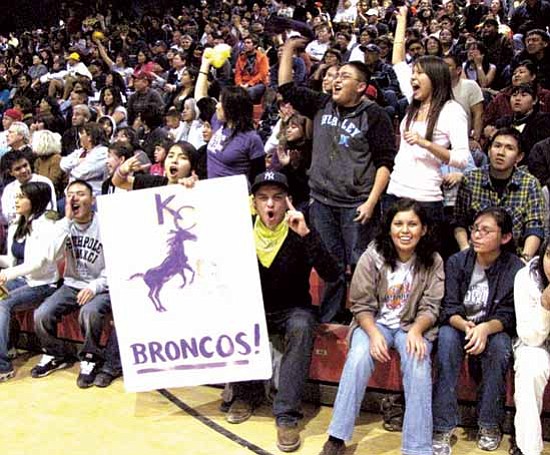 Kirtland Central Bronco fans erupt as the game concludes. The Lady Broncos remain on top of the New Mexico state 1-4A standings with their win over the Shiprock Lady Chieftains, 63 to 51.

SHIPROCK, N.M. - The Boston Celtics/Los Angeles Lakers basketball rivalry is among the oldest in professional sports and may take center stage, but only the level of antagonism separates them from the Four Corners' biggest rivalry between the Shiprock Lady Chieftains and the Kirtland Central Lady Broncos. Fans waited for hours outside the Chieftain Pit on Saturday night before the opening tip.

For this occasion, the Lady Broncos wore the same colors as the Lakers did for their matchup with the Lady Chieftains. They were the same uniforms worn when they won their last New Mexico State championship in 2004-2005. It instilled an advantage they needed.

When asked about playing in front of a sold-out crowd, Kirtland Central's coach Charles Kromer commented, "We played in this venue ... many times over the years. I just emphasized to the kids, 'Hey, you've got to concentrate on what's going on between the lines out there, you've got to focus on that [and] don't pay any attention to the crowd,' and they did a pretty good job of that."

With that mindset, the Lady Broncos quickly took the crowd out of the game, outscoring the Lady Chieftains in the opening frame 14 to 9. The Lady Chieftains opened the game with a bucket and another basket for a brief 4-3 lead and tied it on a trey by Christina Yazzie. Then the Lady Broncos took control of the game with scoring from Raquel Woody, Olivia Harris, Taradena Mitchell, Amanda Kerr and Meghan Yazzie and took a lead they did not relinquish.

Kirtland outscored Shiprock with a 16-point effort from Wynona Jim, Harris, Mitchell and Kerr as the Lady Chieftains' Ashley Dailey, Leayah Benally, Courteney Benally and Yazzie answered with 11 points in the second period, giving Kirtland a 30 to 20 halftime lead.

The third quarter belonged to Shiprock as Mishauna Todacheene and Dailey's points beyond the arc fueled runs, bringing the crowd back into game and closing the Broncos lead to just three points as the quarter ended.

Kirtland's Karley Dodge, Woody, and Mitchell went on a 6-0 run, to the open the final quarter, stalling a fourth quarter comeback by the Lady Chieftains, who were only able to come within five points of the Lady Bronco's lead as they held on for the 63-51 win.

The rivalry has begun with this game and the teams will meet one more time for a district game at Kirtland and during the district tournament.

"I won't be surprised if we meet in state tournament because they are a good team," said Kromer.

"Kirtland came to play. They came to win," said Shiprock Lady Chieftains coach Brady Rivers. "The little things that you do to win a game, we didn't do, like attacking the half quarter zone defense, rebounding, loose balls. You've got to want them [and] you've got to play with a little more heart. That was the difference in the game."

Olivia Harris, Taradena Mitchell, Amanda Kerr and Meghan Yazzie all had 12 points each for the Lady Broncos while the Lady Chieftains' Courteney Benally, Christina Yazzie and Tessa Begay scored nine points each.