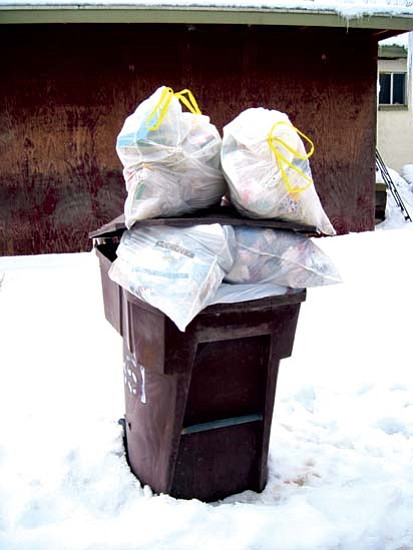 Household trash has&#160;not been picked up for two weeks st Hopi.&#160;The solid waste trucks are having difficulty reaching homes to pick up trash bins due to road conditions.&#160;As a result, household trash is being scattered&#160;and eaten by wild animals and dog packs.

HOPI RESERVATION, Ariz. - The Hopi Tribe's HERT (Hopi Emergency Response Team) was still dealing with many of the critical human service issues from the recent winter storms, but is still faced with serious road damage and livestock deaths as a result of freezing. Even smaller village services like trash pickup has become a serious health issue.

Two weeks have passed, and the solid waste trucks are not able to get to the villages where mud is still too deep to pick up household trash containers, leaving them overflowing with garbage. This invites wild animals and dogs to root through the bins for food.

Additionally, the recent mass recall of Toyota vehicles the Hopi Tribe uses to service Hopi patients have all been parked by the Hopi Tribe's Risk Management department, leaving the health department with only five working vehicles to service the entire Hopi reservation until further notice. Many of these Hopi patients utilize Hopi transport services to attend to their heart and dialysis needs.

Loads of wood, coal, bottled water, along with food bank donations and MRE's (Meals Ready to Eat) were furnished by the state and county emergency organizations. Gravel was also made available to help fill in deep sinkholes in housing areas, and rolls of heavy duty plastic were purchased by the HERT to cover roof leaks. Wood bracing was also provided for ceilings that had collapsed.

A privately owned helicopter was contracted by the Federal Emergency Management Agency (FEMA) to help identify areas that held the most serious snow damage. Unfortunately, the helicopter could not land at Hopi for two days because of the winter fog, which held up delivering much needed items to areas like Spider Mound.

A special HeliBase Team from Window Rock was also contracted by disaster relief to assist Hopi. This team was led by Natalie Lynch, who brought along three highly trained "hot shot" fire team members who specialized in loading and dropping emergency supplies.

Todd Abel, a Division Supervisor for the state of Arizona's Incident Management Team was on hand at the Hopi Veterans Memorial Center in Kykotsmovi for the past week with his "hot shot" team from Tucson. Abel who is a Captain at the Prescott Fire Department during his regular working hours, felt that outside of the helicopter assessment and drop services, that most of the rescue efforts were running smoothly.

Abel distributed donations from the Northern Arizona Food Bank and community organizations working with FEMA. The state and county also brought in items like fresh produce, toilet paper, bales of hay, wool blankets and clothing to assist local community members who were not able to get to a paved road because of the heavy mud and snow.

With temperatures dropping each day, even firewood was freezing into the ground and mud, making chopping wood for heating nearly impossible.

Another dangerous safety issue for Hopi people was being able to get coal to heat their homes.

According to a press release, Peabody Coal Company had closed down the public loading area at Black Mesa this past week because of the road conditions leading to their coal yard. That meant Hopis could not get coal for home heating, and many Hopis could not wait for the HERT team to get coal delivered to their residences. This closure made overall living conditions even more difficult for families.

Hopis expressed anger and disappointment that Peabody did not immediately respond to a formal request from HERT Incident Commander Clayton Honyumptewa to open the coal yard a few extra days to accommodate Hopi's emergency heating needs.

Honyumptewa said, "We haven't had weather like this for the past 30 years ... Even with daily information technology and the ongoing weather reports from the National Weather Service, we thought we were prepared locally for how much it would affect us, but [this] is a lot to manage. We had asked Peabody to assist us in allowing the public loading areas to stay open to help us out just that much, but they declined."

He added, "Many of these roads are under the jurisdiction of the Navajo Nation ... Hopi roads are not [a priority for] them. We are wanting our own Hopi Tribal Transportation Team to take back jurisdiction of our Hopi Reservation area roads, so we can maintain them with our own state and county allocated money. As it is now, we have only two graders and one working bulldozer - these machines are really old. If we could maintain our own areas, we might not have had the mud and sinkhole issues that [is] making driving dangerous for our tribal members."

"It would be good for all of our Hopi councilmen and the village [administrators] to take the same crisis management training that the HERT does. We all need to be on the same safety page if we really want to be of unified service in an emergency situation for our Hopi people," Honymptewa concluded.