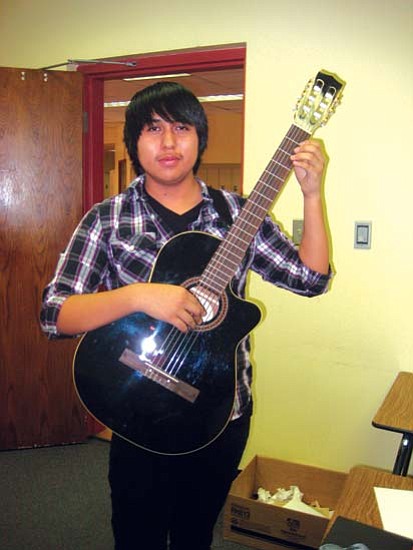 POLACCA, Ariz. - A Hopi High School music student has hit the national airwaves. Malcolm Mowa had his musical composition, "Aerial Ice," performed on National Public Radio. He wrote the piece, which was performed by Ethel, a four-string quartet.

Mowa, a 16-year old junior, said Ethel performed great and he was excited about having his piece aired nationally. He initially wrote the piece as part of the Grand Canyon Music Festival when artist in residence Raven Chacone came to Hopi High and taught six students how to compose.

Mowa learned about his piece being aired nationally when it was announced over the school's intercom.

"It motivates me to want to do more with music," he said. "I want to go to school for music composition and guitar."

He also wants to learn to play the piano.

Mowa said his parents were excited and happy about his composition being aired nationally.

"Everybody wants to hear it, but  nobody knows when it was played," he said.

"It was great, cool," he said. "There are new people at NPR working on programming."

The  new programming allows the top high school students from throughout the nation to have their pieces aired. One of Irwin's former students at Monument Valley High School received a $10,000 endowment for his work.

Irwin said he hopes Mowa stays serious about his musical work because he can major in guitar or composition, and scholarships are available to him.

"I'm confident he can get scholarships," Irwin said. "He's a great example of what can happen when kids apply themselves. Chances are we'll get more success stories."

Irwin said Mowa's fellow students were happy for him, although some teased him about his success.

Mowa said "Aerial Ice" was a happy tune about how he felt at the time. It's classical music and it's just instrumental; there are no words. He added that he likes classical music better than hip hop or rap.

"It's better than a lot of the music that's out there. It's mellow, nice - not bad stuff," he said.

Mowa is also part of the Hopi High guitar class, which recently performed at the Hopi Cultural Center and other places in the community.

Mowa, who also plays baseball, maintains a B average and hopes to get a music scholarship to college. He is the son of Uberta and Clifton Mowa from Kykotsmovi.