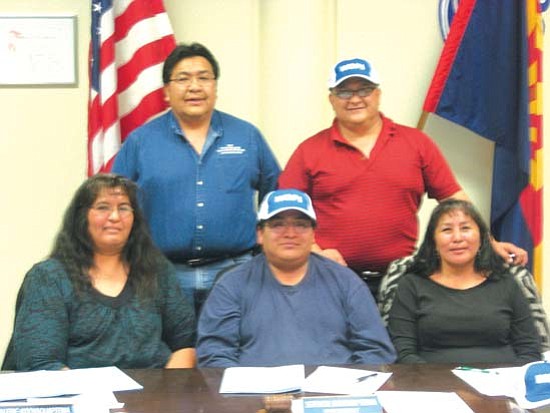 HOTEVILLA, Ariz. - The Hopi Board of Education (HBE) praised Hopi High School during its Jan. 27 meeting.

Muriel Scott, vice president of the Hopi Board of Education, called Hopi High School "a wonderland" of educational success because of all the programs that it offers to its students.

She praised the administration for always asking what they are going to do to improve the education for the students.

Scott is particularly proud of Hopi High School because it prepared her son Matt to attend California State.

"Matt couldn't be happier with Hopi High," she said.

Hopi Jr/Sr High School governing board members and administrators gave HBE a rundown on the programs offered at the school.

Tommy Canyon, president of HBE and a member of the Hopi Jr/Sr High School Governing Board, praised the Hopi High administration for being humble about creating so many programs for students.

"We wish that when we were growing up that we had these programs," he said. "Good job guys. This is going to be a good team for a long time."

Steve Bahnimptewa, president of the Hopi Jr/Sr High School Governing Board, spoke about planned curriculum improvements as well as pending renovations. He said Hopi Jr/Sr High School received $5.2 million from the Recovery Act to improve the school's heating and cooling. The school received another $1.1 million from Act to improve teaching and learning to meet school requirements.

Bahnimptewa also noted that Hopi High received full accreditation from North Central Association for the next five years and has met Adequate Yearly Progress for the past five years.

"If it takes a village to raise a child, then it takes a whole school to make AYP," he said.

"The areas where other schools cut, we invest," he said.

Hopi Junior High Principal Albert Sinquah said the school is acting at rewarding students for academics and taking a proactive approach toward discipline.

Valerie Koiyaquaptewa, a board member at Hopi Jr/Sr High School, also works at Cedar Public School. She said music and other programs have been cut at Whitecone High School because of budget cuts.

Wayne "Muppy" Sekaquaptewa, vice president of Second Mesa Day School (SMDS), called Hopi High "a great model as an organization." He is using his education from Hopi High to help the school, which recently became a grant school.

Sekaquaptewa praised the completion of the new SMDS building in 2007. He noted that the school has made AYP since 2004. He said SMDS offers many programs including computers.

Noreen Sakiestewa, director of the Hopi Department of Education, said her department serves students before kindergarten and after they graduate from high school. She said the Head Start program is closely monitored.