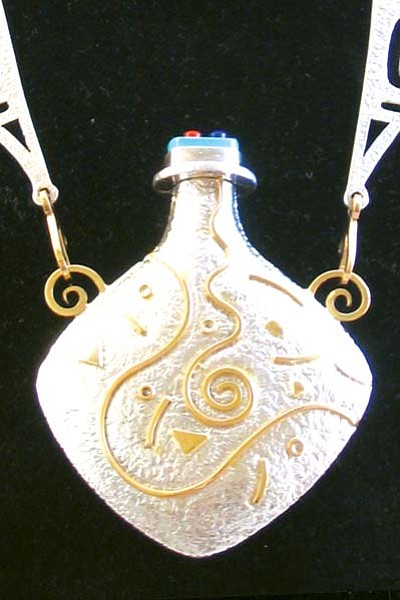 PHOENIX, Ariz. - The Hopi Education Endowment Fund (HEEF) invites you to join them for their Seventh Annual Silent Auction on March 6 at the Phoenix Hilton Garden Inn (4000 N. Central Ave.).

This year's auction features over 20 pieces of art from acclaimed native artists such as Kim Obrzut, Ed Kabotie, and Dan Namingha as well as the featured one-of-a-kind collaborative piece, "Blessing Song," by Verma "Sonwai" Nequatewa and Duane Maktima.

Maktima explained, "We thought the title was appropriate for the fact that the HEEF now needs the Blessing of a song to nourish the seeds that the organization has planted. It is our prayer, our song and through our hands that the seeds planted will have the nourishment to grow exponentially in the future and to perpetuate the work of the HEEF and the gifts they have brought to the youth and Hopi people for the future to come. I am very proud to have been a part of this year's annual fund raising event, and I say kwakwhá to the HEEF. It truly was an honor."

HEEF Executive Director LuAnn Leonard stated, "We are thankful to both Verma and Duane for their creation of the signature piece in addition to all the other donating artists and we invite all to join us as this is their chance to not only get a piece of unique native art, but to also support Hopi Education programs." She added, "For those not able to attend the event, the HEEF also holds a raffle with dozens of prizes including Pendleton blankets, jewelry, gift certificates and a resort stays."

HEEF Development/Resource Manager Vernon Kahe stated, "We're very grateful to our sponsors, and with their support we look forward to hosting a wonderful event." He also added that the HEEF is still accepting sponsorships.

The auction serves as the HEEF's biggest fundraising event. Funds raised are used to support Hopi educational programs and provide funding for Hopi college students via the Hopi Tribe Grants and Scholarship Program. For more information on the auction visit www.hopieducationfund.org or to donate artwork/purchase raffle tickets, contact the HEEF at (928) 734-2275 or e-mail heef@hopieducationfund.org.

The HEEF is a 7871 (a) charitable non-profit organization. All contributions and donations are tax-deductible.