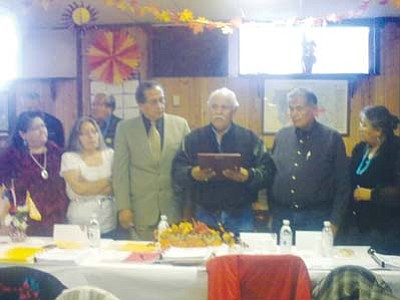 With LGA certification, the chapter now has the authority to exercise its local governance by utilizing the Five Management System Policies and Procedures for its accounting records, pursuant to the Local Governance Act of 1998. One year following its certification, the Navajo Nation Office of the Auditor General will review the chapter's financial records to ensure that all policies and procedures are abided by according to Navajo Nation law.

Christine Sam Barney, community services coordinator at Naschitti said the chapter had a strategic planning meeting in April to address its financial records for LGA certification. "We had to prioritize our planning with strategy. After updating our financial records, we started working on self-governance," she stated.

As a result of LGA certification, Barney said Naschitti Chapter plans to seek outside funding for community and economic development, as well as the sales tax from the local convenience store.

Naschitti, situated at the foothills of the Chooshgai Mountains, along U.S. Highway 491, was founded and established in 1893 after a badger discovered water. Following the badger's discovery, an artesian well was later tapped, but was soon replaced by a windmill that continues to provide domestic and livestock water today. In addition to the chapter, the community also has traditional ceremonial grounds, a local elementary school serving over 100 students, various churches, a laundromat, a head start, farming areas, and Navajo Housing Authority subdivisions in the central part of the community.

"In our community, we have resources that are assets and could allow us to become more self-reliant," said Michael Clani, president for the Community Land Use Plan Committee. "The LGA certification gives us more latitude and flexibility to work in the best interest of the community. We want to see development and improvement. We got mountains, land, people, and U.S. Highway 491, which is ideal for economic development. We have the resources to be successful."

As a certified chapter, Naschitti now has the capacity to administer business sites and create business plans, enforce local taxes and exercise supervisory control of local matters, while abiding to Navajo Nation laws. Naschitti Chapter also has the opportunity to develop local businesses and establish a postal service program that will deliver mail directly to homes.

In an effort to meet the demands of the community, the chapter plans to construct a multipurpose building, other basic infrastructure and update the chapter's land use plan, pursuant to a chapter resolution that allows for land use plan updates every five years. The land use plan was approved by the TCDC in 2002.

Currently, the master land use plan accommodates a population based on the 2000 U.S. Census data and includes proposed development for an elderly home, fire station, office complex, daycare facility, a new head start school, police station, post office and youth center. The chapter is relying heavily on the 2010 U.S. Census data to analyze any growth changes to accommodate its community.

"Naschitti Chapter is the 13th chapter to be granted LGA certification status," Morgan said. "Community involvement is integral to Naschitti's new direction of self-governance. I am proud of this community because markets such as tourism, for example, will draw people to this beautiful region of the Navajo Nation, including access to the Chooshgai Mountains. LGA certification requires long hours and hard work. I commend the community of Naschitti."

"The community can now carry-out their own economic development," stated Delegate Herman Morris (Naschitti/Tohatchi). "The achievement of Naschitti Chapter is promising. I want to extend my appreciation to the chapter administration and community members for investing their time and energy. To continue progressing, the chapter needs to maintain its collaboration efforts to address the needs of its community."

Following the certification ceremony, the TCDC, along with the Navajo Division of Community Development, presented the chapter with a $160,000 check, in an effort to help with the chapter's development plans.