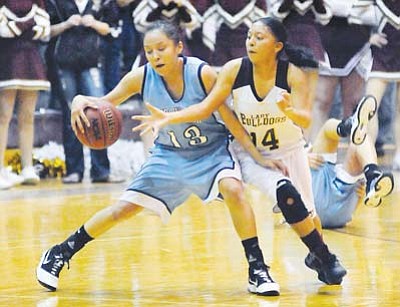 <i>Todd Roth/NHO</i><br> A Winslow Lady Bulldog player defends against a Window Rock Lady Scout player during the championship round of the Winslow Winter Classic. The Lady Scouts emerged as the champions with a final score of 52-45.

WINSLOW, Ariz. - The Championship Game of the Winslow Winter Classic saw the Window Rock Lady Scouts defeat the Winslow Lady Bulldogs 52-45 to claim the trophy. The Lady Scouts improved their illustrious record to 12-1 with the victory. Winslow fell to 8-3 for the season.

Winslow led 17-13 after the first quarter but was down 30-25 at the half and 39-35 after three quarters. The Lady Bulldogs actually had a one-point lead in the fourth quarter but saw Window Rock pull away in the final minutes.

Ashley Mitchell led all scorers with 21 points for Window Rock and was the only Lady Scout in double figures. Coralie Clark tallied nine and Francine Clark scored eight for the winners. Gabby Stacey and Felencia Keams led Winslow with 11 points each.

The Lady Scouts had earned a berth in the final game of the tournament with a convincing 60-42 win over the Monument Valley Lady Mustang. Both of these teams are members of the tough 3A North Region.

The Lady Bulldogs had earned their spot in the Championship Game by defeating fellow 3A North Region opponent Tuba City 77-50 in a much easier than expected win.

The Lady Bulldogs jumped to a double digit 23-11 lead in the first quarter and continued to build their margin to 48-27 at the half and 57-39 after three quarters of play.