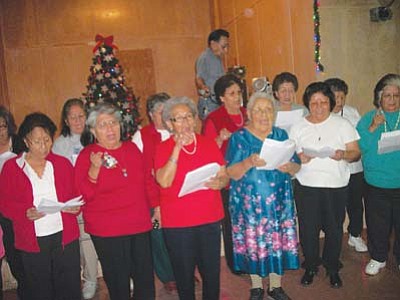 On Dec. 17, the Village of Upper Moenkopi sponsored its annual Christmas Dinner. Community members came with their favorite dishes, including desserts, for the occasion. Governor William Charley stated that this event is held to bring the Christmas spirit to the community and to get everyone together. He also stated that there would be a community giveaway next week and that community members would receive a bag of candy and snacks. When asked whether there may be a Christmas parade, he remarked "Hotevilla and Kykotsmovi have a parade so maybe we will have one some year." Guests were entertained by the Moenkopi Senior Center chorus (above) who sang Christmas songs in both Hopi and English. The crowd was quite impressed with their ability.