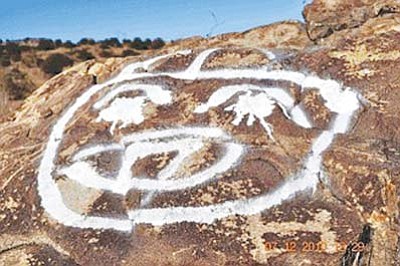 PHOENIX, Ariz. - The Bureau of Land Management (BLM) is offering a $2,500 reward for information leading to the arrest and conviction of those responsible for damaging federally protected prehistoric rock art within the Agua Fria National Monument. Vandalism of rock art is a federal crime that carries a $100,000 fine and a year in prison.

Several panels of petroglyphs were recently spray painted with obscenities and faces in the pattern of jack-o-lanterns. The crime occurred in a remote area of the monument east of Cordes Junction off EZ Ranch Road. Officials believe that the vandals were on location at least twice between July and November.

Under the Archeological Resource Protection Act of 1979 (ARPA), it is illegal to damage ancient petroglyphs or any archeological site or feature. Other charges include vandalism and destruction of government property.

The BLM manages some of Arizona's best-preserved most significant systems of prehistoric sites in the American Southwest. The Agua Fria National Monument contains more than 400 archaeological sites, spanning some 2,000 years of human history. The first Indian settlers moved seasonally to hunt game and gather wild plant foods in the area until about A.D. 1100. Adjacent to rapidly expanding communities, the 71,000-acre monument is approximately 40 miles north of central Phoenix.

The BLM's multiple-use mission is to sustain the health and productivity of the public lands for the use and enjoyment of present and future generations.