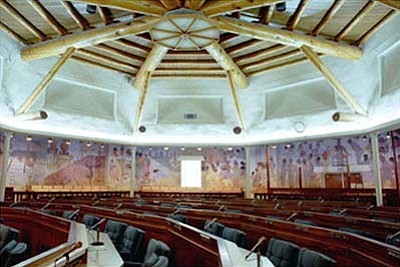 WINDOW ROCK, Ariz. - On the anniversary of a special election that reduced the Navajo Nation Council to 24 delegates, the Council's Ethics and Rules Committee on Wednesday approved an agenda for a special session beginning today that includes legislation to return the Council to 88 members.

After one of the longest campaigns in Navajo history, Navajo voters on Dec. 15 reduced the size of the Navajo Nation Council and empowered the President with line-item veto authority through an initiative process.

Both measures addressed the issue of financial accountability and responsibility of the Council, and the desire to see more checks and balances returned to the Navajo government.

Both Denetsosie and Tsosie have less than a month to serve before leaving their jobs with the outgoing Shirley administration.

The 88-Member Council Election Referendum Act of 2010, sponsored by Delegate Kee Yazzie Mann, purports to refer a referendum measure for a special election. The legislation, however, contains a legal flaw.

President Shirley stated that he doubts the Navajo people would support this latest attempt by the Council to overturn the will of the people. "The way the initiative language was drafted, and what the people voted on, the only way the Council can be changed ... is through the initiative process. If they want to change the size of the Council, they have to go through the same process of circulating petitions, gathering enough signatures, having them certified and holding an initiative election. I venture to say the people aren't going to go for it," President Shirley said.

On May 28, after attempts by the Council to overturn the election results, the Navajo Nation Supreme Court ruled in Nelson v. Initiative Petition Committee that the election was "valid and proper."

But now, the proposed legislation goes before the Council without having determined the effectiveness of the 24-member Council because it won't be seated until Jan. 11.

Following the special election, it was expected that the Legislative Branch would begin restructuring work. Instead, $150,000 was appropriated to a Flagstaff attorney in a failed attempt to overturn the election results.

Despite a court order last May to begin restructuring of the Legislative Branch, work has barely started. The Intergovernmental Relations Committee Transition Task Force heard its first report on proposed restructuring from the Government Development Office Dec. 9 in Las Vegas, Nev.

In the Nelson decision, the Court stated, "The Council possesses no independent authority to alter or abolish its clear deference to the Navajo people. We affirm today that the Council may not use its power to frustrate the will of the People."

In the Governmental Structure section of the opinion, the Court noted that the ideal Navajo Nation government "is oriented toward the public interest and recognizes fully that the power to govern comes from the People, Hózhóójí dóó Hashkéeji."

In their argument before the Court, the Speaker and Council asserted that the Council is the absolute source of governance for the Navajo People, that there is nothing indigenous about the three-branch government, and that traditional laws of the Navajo People have no relevance in modern governance.

"We were ... amazed that our own leaders would make such an argument," Navajo Nation Supreme Court Chief Justice Herb Yazzie stated.

The Court also noted that the result of the Dec. 15 special election means that the Navajo People themselves have enacted new law for the Navajo Nation through the initiative process.

"The initiative/referendum procedures are intended to enable the Navajo People to establish their own form of government and amend Title 2 as necessary," the Court held. "Initiatives are remedial measures, used by the People to enact legislation in the face of an unresponsive legislative branch."

It said that the process is intended to give the Diné a voice in their government.

"Words are sacred, and the Navajo People have the right to keep the Navajo Nation Council to the whole of its words, not simply a portion thereof," the Court noted.

Among those who agreed at the time was Navajo Nation Council Speaker Lawrence T. Morgan.

"The people voted. It is the people's government and there is nothing wrong with their votes," he announced following the Court decision. "There are times when the people vote on new initiatives and things change accordingly such as at the chapter level when a new chapter president is selected - there is a new direction, a new vision."