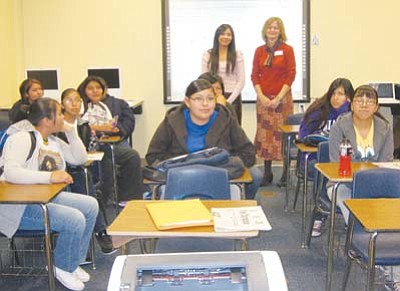 Button urged the students to attend the University of Arizona summer diversity journalism camp. She praised Hopi High student Dion Sahneyah for attending the camp last summer and called him one of her outstanding students.

The University of Arizona summer journalism camp, which is mostly for juniors and seniors, puts together a summer newspaper. They also performed radio interviews on KUAZ where Sahneyah had a chance to ask Arizona Gov. Jan Brewer about the need to protect artifacts.

Button said journalism could lead to many jobs including photography, teaching and public relations.

"One of the fun aspects of journalism is you get to do a lot of traveling," she said. "A good journalist can go into any environment and get a story."

Button said one of her tasks at UA is helping journalism students find internships. She said the students at UA go into the community to get stories. She added that many cover the border stories. She said UA has a dedicated faculty and has a Native American student support services' office to help students with any problems that arise.

The UA journalism department has a branch of the Native American Journalists Association (NAJA). Button was working as a high school journalism teacher when the opportunity arose for her to work at the UA.

Button graduated from the UA with degrees in journalism and economics.

Button and Begody were both interviewed on the Hopi High Teen Show on KUYI, the Hopi community radio station.

Begody, who graduated from Ganado High School, ended up in journalism by accident. She entered college wanting to major in the medical field, but when a brother died she was looking for something else including a job. She begged a friend for a job and ended up writing for the Navajo Times as a correspondent.

"I feel in love with my job," she said. "Journalism became my medicine."

Begody's journalism travels have taken her to South Korea and Japan.