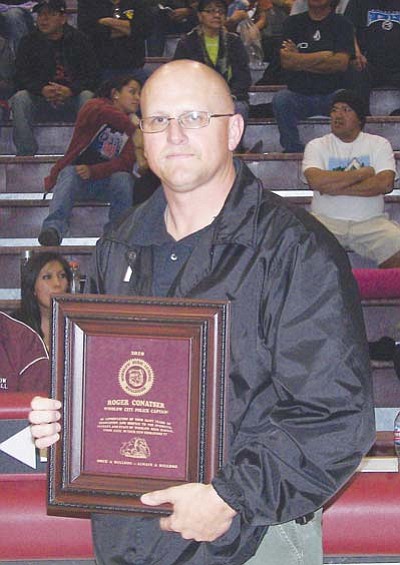 The son of Dave and Laura Conatser, Roger Conatser graduated from Winslow High School in 1987 in the top 5 percent of his class. During his high school years, he was a participant in many school and community activities, groups, clubs, and events. Shining in and outside the classroom, he was a multi-sport athlete in football, basketball and baseball. A dedicated academic, he became involved in Student Council, Honor Society and Key Club.

After high school, Conatser spent time at both Grand Canyon University and Northern Arizona University, where he realized his passion for law enforcement. As a result, he entered the police academy and soon after, was hired with the Winslow Police Department in October 1989.

After years of climbing his way up the ranks, he became Chief Garnett's second-in-command and has dedicated his life to the service of Winslow for the last 21 years.

Over the years, many of his efforts have been focused on giving back to Winslow High School. Conatser has coached girls basketball and softball for several years. Many past and current athletes can tell you what a positive influence he has been for them and the community.

As a police officer, a player, a coach, or a leisurely spectator, he has attended countless athletic and community events and has always been available to help in any way.

His legacy continues with his two children, who are both graduates of Winslow High. For now, however, Winslow must bid farewell to one of its most dedicated, respected, and admired citizens as he retires with his wife Joyce to the state of Utah.

Principal Gilmore commented, "We thank you for the service you have provided to the school system and the community of Winslow. It is appreciated beyond words. You will be sincerely missed by all and we wish you luck in your future endeavors. May Utah welcome you with

As Sam Sees It<br>
Winslow Coach Petranovich gets national honor
As Sam Sees It
Coach Don Petranovich honored: The Arizona Girls' Coach with the most wins in the 20th Century<br>
Beyer recognized by Winslow High