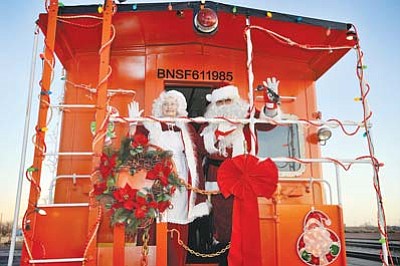 Every December, Santa comes to Winslow on the Christmas Caboose. This year, Santa and Mrs. Claus arrived at the First Street Gazebo on Dec. 11. The Christmas Caboose was delivered by a BNSF engine and both were decorated with Christmas lights and art work. Santa came off the caboose and moved to the gazebo where he listened the all the childrens' Christmas gift requests. The number of children observing and waiting for Santa was probably in excess of 100. Hot chocolate was provided and each child goes home with a toy. Santa and Mrs. Claus do this every year. The event is sponsored by the city of Winslow and BNSF.