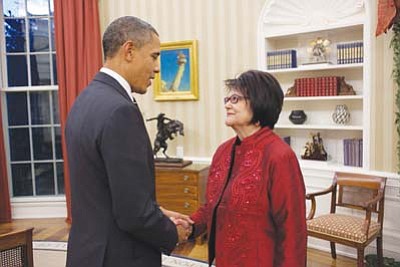 WASHINGTON, D.C. - President Obama on Wednesday signed into law the Claims Resolution Act of 2010, which included the $3.4 billion Cobell Settlement and major tribal water settlements that have been at the forefront of Indian Country's legislative agenda.

"The President and the Congress have continued to exhibit a renewed determination to honor the federal trust responsibility to tribal nations and Indian people," said Jefferson Keel, President of the National Congress of American Indians (NCAI). "Today's ceremony is another concrete example of this administration's commitment ... to honor our historic, nation-to-nation relationship. Tribal leaders look forward to meeting with the President and his administration ... at the White House Tribal Nations Conference and continue building our vision for strengthening Indian Country."

The signing of the Cobell Settlement, which resolves a long running class action litigation over mismanagement of Indian trust funds, comes one week prior to the President's Tribal Nations Conference, the second of his Administration. Leaders from the 565 federally recognized tribal nations have been invited to Washington, D.C. on Dec. 16.

The Cobell Settlement also includes payment for resource mismanagement and funds for consolidation of fractionated lands. The case has been pending since 1996. In the last month, the Cobell Settlement moved forward rapidly in the Senate as budget neutral legislation, after lingering for the last year in both houses. Unresolved for 14 years, the settlement was part of a number of historic measures included in the Claims Resolution Act of 2010.

In addition to the Cobell Settlement, historic water settlements vital to Indian Country, totaling over $1 billion, were passed as part of H.R. 4387. The water settlements involved the Crow Tribe, Taos Pueblo, the White Mountain Apache Tribe, and the Aamodt Settlement including the New Mexico Pueblos of Nambe, Pojoaque, San Ildefonso and Tesuque.

About The National Congress of American Indians