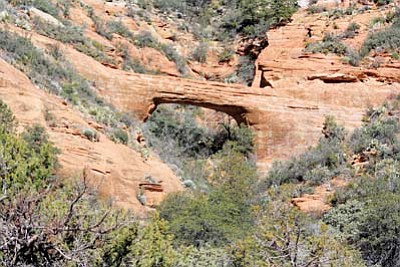 SEDONA, Ariz. - Sterling Pass to Vultee Arch is just a tad more than five miles, but the elevation change of more than 1,000 feet can make the hike challenging.

It's about 10 a.m. at the start of the hike and the temperature is 36 degrees. During most of the hike, it won't get much warmer because the higher elevation gets colder and most of the trail is tree and shade covered.

Okay, the body will warm up a little because it is working hard to get up to Sterling Pass - and there are some spots along the trail where the hikers are hit by sunlight.

This hike included a little bit of everything including a frozen mini-waterfall, fallen leaves with fall colors, the great red rocks of Sedona, the scenic Vultee Arch and a tarantula.

Vultee Arch, a large sandstone cliff at the side of a wooded canyon north of Sedona, can be reached from two trails. The easier trail is simply the Vultee Arch Trail, but the quintet from the Prescott Outings Club chose the Sterling Pass Trail, which links up with Vultee Arch. This approach from the east starts from U.S. 89 in Oak Creek Canyon.

The trail begins with a rusty sign by milepost 380, not far from Slide Rock State Park. During the summer, wildflowers can be found along the trail, but in late November only a couple of flowers remained, which was surprising.

The trek up the switchbacks of Sterling Pass is steady and steep. But with each step up, the view changes. The trek up the mountain surrounds the hiker with the red cliffs of varying sizes.

At the summit, which is Sterling Pass, the path winds through a narrow gap of the two cliffs, then goes down the slightly steeper other side as the switchbacks continue. Hikers enter Sterling Canyon with not many views of the red cliffs.

The trees in the area include alligator juniper, Gambel oak, Arizona cypress, white-barked sycamore, dwarf canyon maples and Douglas Fir. Manzanita and shrub live oak are found more on the north side of the trail.

Once the descent is completed, the landscape opens and becomes flat as hikers enter into a bit of a meadow. A small stream is found, but it was mostly dry during this trip.

During summertime, hikers can expect to pass a stream several times before a side path leads hikers to a rocky area with a good view of Vultee Arch. To the right of the path sits a plaque noting that a plane crash killed Gerard Vultee and his wife Sylvia in the 1930s.

The arch will catch photographer's eyes. There is also a bit of cacti along the trail including the climb up to Vultee Arch. The trail is part of the Red Rock Secret Mountain Wilderness.