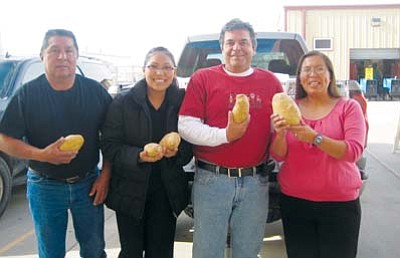 POLACCA, Ariz. - The National Honor Society members at Hopi Jr./Sr. High School are sponsoring their annual food drive. The food drive started on Nov. 19 at the home basketball scrimmage. The NHS members raised funds for Thanksgiving meals for families that are less fortunate so they could have a good meal on Thanksgiving Day and are now gearing up for the upcoming Christmas holiday.

NHS Advisor Lavonne Adams said there will be food boxes for donations set up at the local stores, elementary schools, the Hopi Tribe and Hopi High. Adams said this year the NHS members set a goal to raise 200 food baskets. All of the food baskets will have turkeys.

Adams said, "We will try to get donations at the home basketball games, so for every donation of two cans of non-perishable food items we will give them a free bag of popcorn."

She said that they will get in contact with the elderly program at the Hopi Tribe and the community developer offices to determine which families are most in need. All villages will be considered.

Adams' favorite part about the food drive is, "To see the NHS members donate their time and energy to raise and collect donations. Also, when we deliver the food baskets, it's nice to see the joy and excitement on the NHS members as well as the elderly's faces. It gives me a nice feeling to know that we helped someone."

Adams said the food drive could be improved by organizing in advance and going to different big corporations for donations. She also said, "We also could have started collecting donations earlier than we did this year."

Adams recalling her best memory said, "Well, I only have been a second hand helper for the past six years, but I enjoy interacting with the NHS members and the elderly."

Adams said that the Hopi High School's administration is helpful with the food drive by providing the transportation when they deliver the food baskets and by allowing the National Honor Society members to fundraise for the food drive at the school.