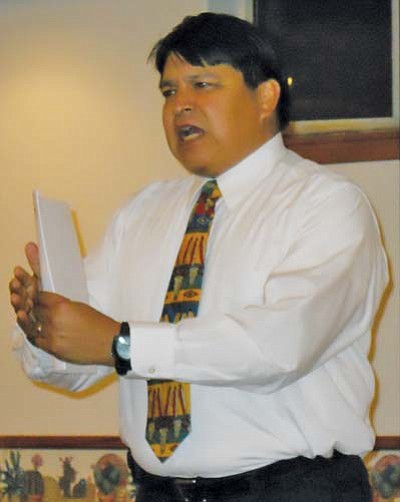 <i>Rosanda Suetopka Thayer/NHO</i><br> Gary LaRance was a primary presenter at the Upper Village of Moencopi. LaRance teamed with former Hopi Chairman Ben Nuvamsa about legal and tribal jurisdictional concerns with proposed Hopi Draft 24A. A formal BIA secretarial election to vote for or against Draft 24 will be held Jan. 27.

This is the question that is on the minds of Hopi and Tewa voters, who are being asked to register and vote in a special BIA secretarial election on Jan. 27. The election focuses on a major change in the current Hopi Constitution, which will change the current status of the current one branch of Hopi government into four new branches - "Legislative, Executive and Judicial" with the newest branch titled category "Villages."

In a presentation to the Hopi and Tewa public held in Upper Moencopi Village on Dec. 10, former Hopi tribal Chairman and CEO of KIVA Institute Ben Nuvamsa and former Hopi Tribal Chief Judge Gary LaRance shared with the audience their legal and tribal jurisdictional concerns with Draft 24A. Draft 24A is endorsed by Hopi Chairman Leroy Shingoitewa and his current constitution task team.

One of the questions posed to the audience was, "Do the 12 villages really want to be a new branch of government and let the other three branches of Legislative, Executive and Judicial make their village decisions?"

"The villages will no longer be able to exercise their current inherent village sovereign powers because those powers may be exercised by the Chairman or the other three branches if this new Draft 24A is approved, but that is just one of the many dangers of this new proposal" stated LaRance. "The villages right now, have the most power they will have under our system of government. It's called 'inherent aboriginal sovereignty,' a legal term that was coined by the recent Hopi Appellate Court decision regarding Bacavi Village's certified question about their village authority to remove their council representatives. If the new Hopi Constitution (Draft 24A) passes, villages will give up that ultimate absolute village authority."

As an example, Upper Moencopi Village has four tribal council representatives serving currently. If the new Draft 24A is approved in January, only two representatives will be allowed for every village regardless of population or need.

This two-person council representation allocation will affect even villages right now that do not participate or recognize the Hopi council such as traditional/hybrid governed villages like Hotevilla, Lower Moencopi, Shungopavi or Old Oraibi.

LaRance and Nuvamsa shared the concern that if the new draft is approved, these traditional or "hybrid" government villages, who now decide on their own how land is allocated for homes, farming or ranching, or even how adoption of Hopi-blooded children or grandchildren, will have to give up that privilege. All matters pertaining to villages will then be centralized under the new branch of government, that will be regulated by the Hopi Tribe central government.

Economic development and village revenue was another area of concern.

Currently, because each Hopi village is autonomous and sovereign, each village and its members can choose their own individual village economic projects such as the Moencopi Legacy Inn, the Tuuvi Travel Center or the Hotevilla Co-op Store. These projects do not currently have to ask the Hopi Council for permission to build or develop.

As long as the individual village membership supports and endorses a village project, each village currently can determine for itself its direction for economic development.

If the draft is approved, all 12 villages will then have to obtain approval of the Hopi Council to enter into contracts for any new economic projects under the new branch of government.

The question of individual village monetary profit is also being questioned. The new Draft 24A says that "all revenues and funds will go into an annual budget controlled and managed by the Hopi Tribe from any and all funding sources."

There will also be mandatory "records management" that will subject all village records to Hopi tribal scrutiny. This will no longer be in the hands of individual villages. This includes contracts, personnel records, village policies, travel records, grants, studies, written or auditory records.

One of the biggest dangers and concerns expressed by Nuvamsa-LaRance is the new constitution Draft 24A will give "absolute power" to the Hopi Chairman. It is stated in Draft 24A, Article V, Section 4(e), "The President shall have power to represent the Tribe in ALL matters with any government, entity or person" with no controls, checks or balances to the Hopi people."

Also in Draft 24A, it is stated the Hopi President or Chairman can "dismiss" or "remove" the Vice Chairman for "insubordination," though no definition is given for what that term of insubordination can mean or be interpreted as for this removal or dismissal.

In addition to these concerns expressed were questions raised by Hopi community members who attended the presentation, like former Hopi Tribal Chief Judge and Attorney Gary L Thomas.

"To me, this new Hopi Constitution Draft 24A is basically setting up a new potential power conflict between all of our 12 villages and the Hopi central government. This new draft doesn't seem very well thought out and certainly needs more time for the people to understand what all the legalese means," said Thomas.

Lower Moencopi member Lorena Naseyowma asked LaRance, "So who is going to pay for all these administrative changes? Where does it say in the new draft, that the new tribal budget will pay for the oversight of the new branch of government? And who is going to choose that person to run that branch called Villages? "

In addition to Thomas, Verrin Kewenvoyouma expressed concerns and possible conflicts of interest that might occur if the new constitution is passed. These concerns were expressed to Nuvamsa after the presentation.

Another public presentation with LaRance and Nuvamsa will be offered at Kykotsmovi Village before the end of the month.

Village requests to have Nuvamsa-LaRance share their presentation with Hopi/Tewa communities on Draft 24A can be arranged by calling (928) 221-7001.