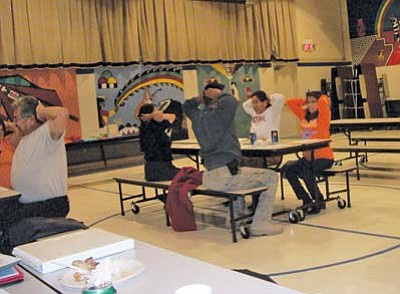 HOTEVILLA, Ariz. - On Dec. 2, the Hopi Alliance Against Substance Abuse (HAASA) held its monthly meeting at the Hotevilla Bacavi Community School. This was the last meeting for the current officers and elections were held for the next year's officers. Debby Baker chaired the meeting as president for the final time. She reminisced about the history of HAASA as an organization that was created by the need to have a sponsor a Youth Drug Conference.

The grassroots organization took on the challenge and sponsored the conference at HBCS for 500 students. Individuals gathered from the local meth coalition to put on the event. After this, the Bureau of Indian Affairs law enforcement used the conference as a model for community outreach. The group continued with awareness events and sponsored the weeklong "Sobriety Challenge Week."

Before 2009, HAASA was just a group of people but then a grant fell into their hands from the Governor's Office, which Baker stated "wasn't what we expected." Many in the group were unfamiliar with managing a grant and hand to learn. She credits Gene Kuwanquaftewa, CSA from Shongopavi, for overseeing the grant. The grant allowed the group to become more organized and officers were elected in October 2009. The group undertook a survey of underage drinking to fulfill the grant and did the survey across the Hopi Reservation in a couple weeks.

HAASA has also held events since the grant with no money, relying on the generosity of programs and community members. Because of the work HAASA was recognized as a furthest advanced of tribal coalitions. They have since developed a calendar of events they would like to participate in and try to organize differed events as well.

One of the highlights of the last year was the recommendation to revise Ordinance 21 of Hopi tribal law to address some drug related offenses currently not covered in the law dealing with meth and other drug related offenses. Hopi Tribal Vice Chairman Herman Honanie was in attendance and updated the group on the status of the revision. He stated that with new representatives coming in, the Law Enforcement Task Team (LETT) is currently in transition, but he has instructed the task team to push the revision through. He encouraged the group to attend LETT meetings to participate in the process. This was met with great anticipation since HAASA has worked with LETT in the past.

Some plans were to develop a resource document that can be distributed to the community for services that are available. Other issues that HAASA has taken on is coming to the table to discuss ways to address issues in the community such as drug dealing, using and children in the household. The groundwork has been laid for a Drug Endangered Children team by HAASA with the network that has been established. Baker stated, "HAASA is contemplating how to best use our energy to address the drug dealing and using problem or going after the source directly. The question is where our efforts will be better used. We have to review the mission statement and make sure HAASA members are more informed."

Other issues that have been discussed in recent meetings was the concerns of parents at Hopi Jr/Sr High School that not enough was being done to help students that were caught using drugs and alcohol at school. Many times students face some suspension without any consequence for their actions. The parents felt that more should be done to get these children help or to accept more consequences of their actions. Suggestions given were to go to the school board and a policy change was suggested. One suggestion was to make offenders do manual labor at the school as a penalty to give the students some form of punishment. Another concern from Carlton Timms from Community Bridges in Winslow, at the Hopi Housing he witnessed a situation where an individual was extremely intoxicated and the Winslow Police were called to the scene. Upon realizing the extent of the situation, Timms asked if the individual would be offered any kind of treatment options. The Winslow Police replied that doesn't happen and he would be put in jail and released without any other consideration. He expressed the need to have police agencies be aware of the options available to help these individuals. Many times these people become repeat offenders because they do not get the help they need.

The night ended with a gift exchange and the announcement of the 2011 officers. Carlton Timms was elected President; Eldon Kalemsa is Vice President; Terri Honanie is the secretary; Arlene Honanie is the treasurer; and, Gene Kuwanquaftewa is the Sergeant At Arms.