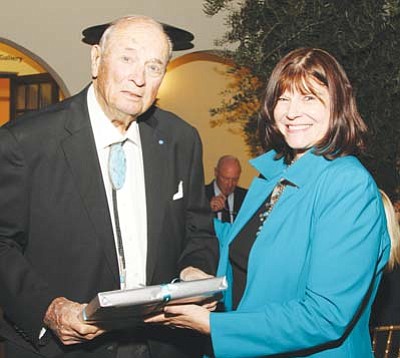 PHOENIX, Ariz. - The Heard Museum recently celebrated a most generous gift by one of its life trustees, former General Electric Company Vice Chairman Jack S.Parker. Parker, 94, made a legacy gift to the Heard Museum's endowment through the Maie Bartlett Heard Society, the Heard's planned giving program. Parker's gift included a $1 million cash annuity, a $1.6 million art collection bequest and cash contributions which have been matched by GE over the years. His total giving to the Heard exceeds $3 million, and a gallery has been named in his honor.

Parker was introduced to the Heard by his friend, former U.S. Supreme Court Justice Sandra Day O'Connor, in 1986. Since then, Parker has been a member and supporter of the Heard and its mission of educating the public about the art and cultures of Native peoples.

During a dinner held in Parker's honor on November 17, O'Connor sent a congratulatory message in which she stated, "Jack Parker is a gifted man who has been a great supporter of the Heard Museum, and this recognition is richly deserved."

Dr. Letitia Chambers, president and CEO of the Heard Museum, said, "The Heard Museum is most grateful to Jack Parker. He has contributed to the Heard in so many important ways, giving of his time and talents as a Trustee, as well as contributing significant funds and leaving his wonderful collection as a bequest."

"Without any doubt, the Heard Museum is unique," said Parker. "It's recognized as the place to learn about Southwest Indians. The Heard has done a great deal of work with the Indian communities; everything here is authentic, and it has great personnel. The Heard is a great place and I'm happy to be able to support it."

The Jack Steele Parker Gallery is home to Around the World: The Heard Museum Collection, which displays items collected by museum founders Dwight and Maie Heard on their travels as well as items from the Fred Harvey Company Collection. Items from Africa, the Americas and Oceania are on display, in addition to a cradleboard exhibit composed of pieces from the Harvey Collection.