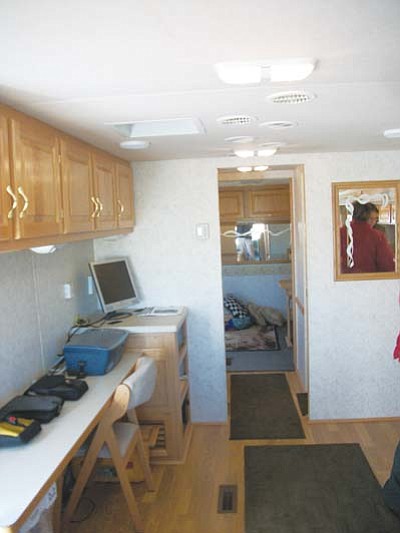 TUBA CITY, Ariz. - On Nov. 30 the Meth Suicide Prevention Initiative from the Tuba City Regional Health Care Corporation (TCRHCC) sponsored a Drug Endangered Children (DEC) training session. Trainers from Phoenix were on hand to give information on the serious threat to children caused by meth usage by their parents.

The DEC training team goes to communities in Arizona to help start other DEC teams which are multi-disciplinary task forces made up law enforcement agencies, Child Protection Services and medical professionals who respond to a child that is in a dangerous drug environment in their home. Many time children are sexually and physically abused in these environments so it is important to have a collaborated effort to address situations where a child is in danger.

Mae Washington, a counselor from Greyhills Academy High School, opened the day by introducing Thomas Hatathlie from TCRHCC Mental Health Services to do an invocation. Hope MacDonald-Lonetree welcomed the participants. Rich Rosky, Chairman of the Arizona Alliance for DEC, gave the opening presentation by posing the question, "How do we make the family whole?" He noted that in Coconino County there is an increase in meth usage.

In Maricopa County the DEC team was able to coordinate efforts with CPS and narcotics officers to collaborate on investigations. Sometimes children lived in deplorable conditions with no food or electricity in the home. The parents were using or making meth and sometimes their friends are convicted sex offenders. Therefore, the child is considered in danger and requires CPS assistance to get the child out.

The unique thing about Maricopa County is that they have a mobile DEC, which gives children a comfortable area to go through the interviewing process. In the back there is a little room with a TV and video games. Many times since these children are in their parents' presence when they are using drugs, they almost always test positive for meth in their system.

Rosky would like to see DEC established similar to MADD or SADD organizations, which include treatment of children as well as placement. Rosky states that children are victims of the environment. In the U.S. 21 million children live in a drug home. DEC breaks the cycle of drug abuse for children. Even infants have been exposed to drugs and suffer withdrawal symptoms. Simply, when a parent is on drugs, they cannot properly care for their children.

It was stressed that there needs to be a strong law enforcement and CPS collaboration since many times law enforcement barges in and destroys the crime scene. Dana Markusen, a CPS Investigation Supervisor, has been able to work closely with Maricopa Country law enforcement to allow CPS to conduct their investigations since CPS needs evidence as well. Many times the area needs to be documented to ensure child abuse charges stand up in court. If drugs are kept on a table, the height of the table is measured to show that a child has access to the drugs. Other instances encountered are chemicals from manufacturing near a child's sleeping areas. Drug dealers will also hide drugs and money in a child's bedroom.

Brian Kasprzyk, from the U.S. Attorneys office in Phoenix, also was on hand to talk about the crimes that are under federal jurisdiction in Indian country. He stated that when it comes to deciding whether it is pursued by their office, the question to ask is, "Where does it best fit?"

The Adam Walsh Act enables the attorneys to consider child abuse as a major crime on reservations. Many times if a case is handled by their office, it doesn't necessarily mean that the case is being elevated. There are many definitions of neglect, such as a person's state of mind or whether they intentionally, knowingly committed neglect or were recklessly negligent. So many things have to be taken into consideration at the federal level as well as standard of proof beyond a reasonable doubt to a jury. Evidence needs to be gathered, such as medical evaluations, bodily injuries and other factors. Photos can also be helpful as evidence; however, law enforcement photos are always more credible.

Kasprsyk was asked why the FBI and DEA are not more engaged on Native lands. His answer was that in Arizona, there are only 20 FBI agents so it's often difficult to send them out to the reservations. Another comment made by Dennis Bowen of Tuba City was that even when agents come to investigate, they do not do a thorough job and perpetrators go free and are back in the communities. He asked Kasprzyk to send a message that a more cohesive partnership is needed when it comes to these crimes on the reservation.

Jeanne Blackburn from the Arizona Governor's Office for Children, Youth and Families Division for Substance Abuse Policy, came to encourage the Hopi and Navajo community to start DEC teams. Many times there are loose organizations that resemble a DEC team but that a DEC team needs to be more cohesive to respond to situations where a child may be endangered. She stressed educating stakeholders about drug endangered children and stated that medical treatment, counseling education and placement needs all should be addressed.

Sometimes on the reservations, there is a shortage of foster homes, so a DEC team can collaborate to find more foster parents. Different entities such as schools, mentors and faith- based services also need to be included.

Funding is always an issue, but sometimes just asking for help can yield unexpected donations. Blackburn noted that at one meeting at the Governor's Office, she expressed a need for a DEC Coordinator and the head of the National Guard was able to step up and offer the services of Sgt. Chadwick Trotter to coordinate training events. "So sometimes you just need to ask for help," she stated.

Rosky concluded by stating the need for an Intergovernmental Agreement to be drafted to make a more cohesive collaboration with tribal and state entities. He noted that there are federal funds available and IGA formats already available for interested tribes. He is also able to express concerns directly to the federal drug czar in Washington, D.C. Blackburn also is part of the Governor's Office so she also has the ability to express concerns directly to the governor.