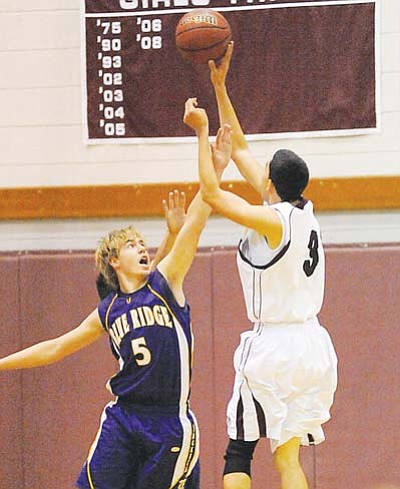 <i>Todd Roth/NHO</i><br> A Blue Ridge player defends against a Winslow Bulldog player during final round action at the Cake Tournament held in Winslow on Nov. 30.

WINSLOW, Ariz. - The Blue Ridge Yellowjackets edged the Winslow bulldogs 57-53 in the Cake Car Company Shootout Tournament Championship Game on Saturday. The loss left the Bulldogs with a 5-3 record for the young season.

The Yellowjackets led 18-7 after the first quarter and 27-25 at the intermission. The margin was back to nine points at 33-34 after three quarters. Winslow got to within a point in the closing minutes but never got over the hump.

Blue Ridge had defeated Payson 57-40 to reach the finals earlier on Saturday. The Yellowjackets were led by Nick Johnson who tied Payson's Tanner Hintz for game high honors with 15 points. Korey Wilcox was also in double figures for the winners.

The Bulldogs had defeated the Snowflake Lobos 67-64 in a thrilling semi-final game Saturday afternoon to reach the finals. Winslow had to erase a huge early deficit and win the game in the closing seconds.

Kraig Shirley led Winslow with 25 points, one less than Snowflake's Bonham who was the game high scorer with 26 points. Winslow had two more players in double figures in Jevon Estelle with 19 points and Tyler Williams with 13.

Snowflake defeated Payson 55-50 in the third place game. Michael Bonham led the Lobos with 22 points. Chase Waldon scored nine for the Lobos. Tanner Hintz with 18 points and Cole Novak with 13 were in double figures for the Longhorns.

An All Tournament Team was selected and included three Winslow Bulldogs: Jevon Estelle, Kraig Shirley and Tyler Williams. Blue Ridge was represented by Nick Johnson and KoreyWilcox. Snowflake Lobos on the elite unit were Michael Bonham and Trent Hall. Josh Oakley of Payson, Zachary Miller of Joseph City, and Blake Barker of Sedona and Marcus Begay of Ganado rounded out the All Tournament Team.