Propane truck rolls over near Moenkopi 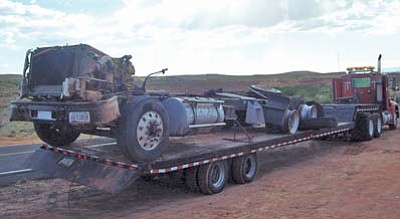 <i>Tyler Tawahongva/NHO</i><br> The remnants of a tractor-trailer that flipped near Moenkopi and Tuba City on Aug. 25 prepare to be transported. The driver was taken to Tuba City for medical treatment.

LOWER MOENKOPI, Ariz. - At approximately 1 a.m. on Aug. 25, a semi truck carrying propane was heading west when it rolled over while approaching the bridge across Moenkopi Wash. According to a Department of Public Safety investigator, the Tuba City emergency crews were able to extract the male driver from the wreckage. He was taken to the Tuba City Hospital for treatment.

There was reportedly no indication of impairment on the part of the driver and mechanical error is being cited as the reason for the accident.

There is no report of contamination to the environment. The only fuel spill was from the fuel tank of the truck involved. No propane was leaked.

Another tanker was brought out to transfer contents from the wrecked tank to another tank. A towing company out of Flagstaff salvaged the damaged tractor trailer and put the empty propane tank on another diesel truck for transport.

Highway 264 was closed most of the day until approximately 4 p.m. DST. Travelers were being encouraged to drive around Luepp or to go through Hardrock to get to Tuba City, which was more than a 100 mile detour. This disaster is reminiscent of the disastrous gas spill a few years back where gas leaked at the surrounding crash site. In this incident, fortunately, no propane was leaked.

Due to the quick response to the incident from the Tuba City Fire Department everything was coordinated effectively.

According to Lt. Becenti from the Tuba City Fire Deptartment, he is the only one in the crew that has HAZMAT training. He was able to perform the necessary procedures to make sure there was no propane leaks and take appropriate action.

He also commented that the spot this accident occurred was ironically the same spot that they responded to a crash the night their firehouse was burned.

Fortunately, the outcome was good and the road was opened in a timely manner.

Thankfully this was a relatively small incident. Presently, the Tuba City Fire Department has very limited staff and resources available, and with the recent burning of their firehouse, resources are even more limited. Should a more serious incident occur, Tuba City residents would have to wait for a crew to arrive in about an hour from Flagstaff.