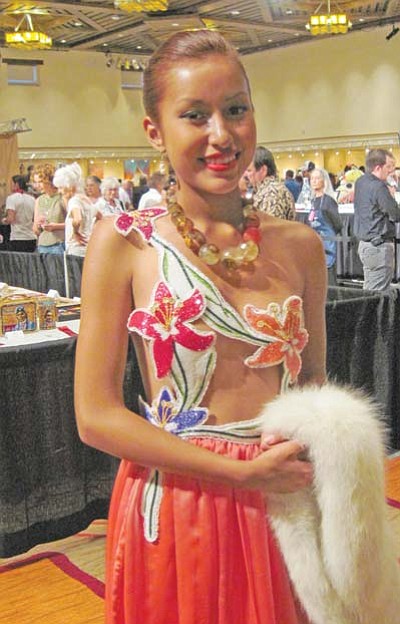 <i>Rosanda Suetopka Thayer</i><br> A young woman smiles as she models a beautiful beaded dress by Orlando Dugi from the “Beauty and Elegance” clothing line out of Utah at the 2010 Santa Fe Indian Market. A number of traditional and contemporary types of artistry were honored at this year’s Market.

This year, that esteemed honor was shared, for the first time ever, between two very shocked, but happily surprised southwest Native artists whose names were announced on Aug. 20 at the Sweeney Convention Center in downtown Santa Fe. A packed house of art patrons and collectors, family and numerous visitors were greeted by Dr. Bruce Bernstein, director of the Southwestern Association for Indian Arts (SWAIA).

Stetson Honyumptewa, Hopi, won for his "Messenger of Rain" kachina sculpture along with Blackhorse Lowe, Navajo, who won for his film "Shima'sani'." Film was a new category of art entries this year.

It was a true blend of an older more traditional, historic art form of kachina carving complimenting a new, technology driven art form of film taking Native story telling to a new height of visual presentation.

Honyumptewa was visibly shocked when the announcement was made, and shared this in his acceptance speech, when he told the crowd that he had only been to Indian Market for just four years and this year he was dreaming about his entry, and felt like he was "in a dream", saying with a laugh, "Don't wake me up!"

"I am just so deeply honored to win this, I would also like to thank SWAIA for understanding and supporting our Native art traditions, encouraging us to keep those traditions alive," he stated.

Lowe is one of the youngest winners of the Best of Show award. He stated he was pretty nervous when he received the phone call late Thursday afternoon to be present at the luncheon because the SWAIA person who made the call didn't tell him what he won, just to make sure to be there at the event.

He said he didn't sleep much that night.

"The fact that SWAIA added a film category to its annual art competition, shows the progress towards more media-savvy Native storytellers. It brings the film medium the respect and attention it deserves, particularly our younger artists who are making lots of newer and more edgy kinds of independent films," said Lowe.

The recurring theme of appreciation voiced from winners in all 11 divisions of art classification top awards this year was about honoring and preserving tradition in Native art forms.

There have been several art forms that almost died out, but with SWAIA's encouragement and added categories to recognize such artistic pursuits, like woodlands "traditional birch bark bitings," younger artists are researching their heritage, seeking out traditional art practitioners of their varied mediums to assist or mentor their work.

The 60 judges for this year's market debated over the final two top winners for hours before deciding on the historic double-win for Honyumptewa and Lowe.

Most judges agree, that there will be that one special piece, the one that makes you stand back and just say "Now that's a winner."

Life definitely won't be the same for Honyumptewa or Lowe after their historic win.