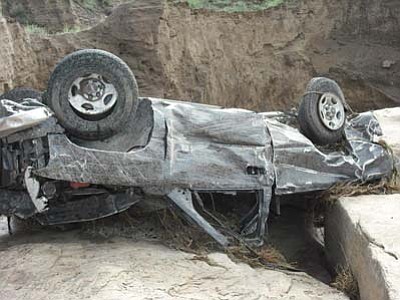 <i>Courtesy photo</i><br> Despite weighing half a ton, vehicles such as this truck in the Blue Gap/Tachee area are no match for rushing floodwaters, which are also strong enough to carry away large boulders and appliances.

WINDOW ROCK, Ariz. - The monsoon rains over recent weeks have been much appreciated, but residents across the Navajo Reservation now face hardships of road washouts and flooding. Having no access in or out of residential areas poses a health hazard to people who may need to visit medical facilities. Dialysis patients, people on oxygen, the elderly, and those who need frequent medication are most at risk.

Severe thunderstorms have contributed to power outages while the subsequent flooding has resulted in water line breaks. With school starting soon, bus routes need to be accessible.

The Navajo Commission on Emergency Management issued a state of emergency on Aug. 4 until further notice. Johnny Johnson, Crownpoint Department of Emergency Management (DEM) Program Specialist, said, "The state of emergency declaration provided support with resources such as utilities and private donations to lessen the stress on the communities ..."

Some of the communities hardest hit included the Church Rock Chapter in New Mexico, where the main bridge connecting the community from the west to the east was washed out on July 31.

The bridge was repaired the following day but was washed out again on Aug. 2 and repaired for a second time on Aug. 5. In the meantime, a secondary road has been established east of the area. The community was also without water and electricity due to a water line breakage and power outage. Utilities were repaired last Thursday. A shelter was established at the Larry Brian Mitchell Recreation Center in Gallup, N.M. during the emergency.

Johnson said the present repair on the Church Rock Bridge is temporary. He stated that meetings would begin for planning of a more solid bridge to mitigate the problem of washouts, adding that planning partners includes the Navajo Nation, State of New Mexico, McKinley County, DEM and the Bureau of Indian Affairs.

In Coyote Canyon the Dibe Lichii housing complex received water damage to 90 units. The homes were located at a lower elevation and water came up to the doors. A microburst reportedly destroyed a mobile home July 31 approximately 2 1/2 miles south of Standing Rock, New Mexico. No one was home at the time.

On the Arizona side, there was flooding and road washouts reported from several locations including the Blue Gap/Tachee Chapter where flooding carried a vehicle down an arroyo. No injuries were reported. DEM continues to stress that motorists and pedestrians - especially children - stay away from flooded roads, bridges, arroyos and pools of water. Curious onlookers are often seen standing on the edge of a wash to watch floodwaters. However, the edge of a wash could be unstable and suddenly give way.

Rushing floodwaters are strong enough to carry away vehicles and large boulders and appliances. In addition, the water is often contaminated.

A tornado sighted near Chinle was confirmed by the National Weather Service (NWS) from Flagstaff. The tornado was rated as an Enhanced Fujita Zero (EF-0), meaning it was a tornado with minimal strength. Tornados are rated on the EF scale from 0 to 5, depending on wind speed and damage potential. The NWS reports that tornadoes come in a variety of shapes, widths, and geometries so it is not unusual to see a tornado that is wider at the bottom than at the top.

DEM also reported that there are many large areas of standing water across the Navajo Nation, and that mosquito activity would increase.

As of press time, there were no reports of West Nile Virus affecting animals or humans on the Navajo Nation according to Dr. Scott Bender with the Chinle Navajo Livestock and Veterinarian Program. Dr. Bender reports that mosquito trappings will be done this week to determine whether or not there is potential of West Nile Virus.

If possible, pools of standing water should be treated with mosquito pellets and water that has collected in open containers outside the home should be emptied to avoid mosquito infestations. People planning to be outdoors for extended periods of time should use insect repellent and wear long sleeved shirts and long pants to prevent mosquito bites.

Whenever weather emergencies occur, the public is advised to work with their local chapter first as many chapters have emergency funding available. When all chapter resources are depleted, the chapter will then ask the DEM for assistance. The counties and the states become involved only when additional assistance is needed.

Calls to the county or state are referred back to the Navajo Department of Emergency Management. Their phone number is (928) 871-6892.