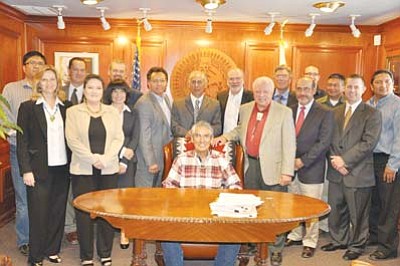 "This is a historical moment for the Nation," President Shirley said.

About $3.3 million will go toward the development of the Tse' Daa K'aan casino, which is expected to open in October, said Ethel Billie Branch, an attorney for Orrick, Herrington and Sutcliffe, LLP, who helped prepare the documents.

The remaining $2 million will fund the Chinle casino, which is expected to open by year's end.

These loans are considered to be the first of five for projected casino development. Other sites for casinos include Upper Fruitland, N.M., Twin Arrows, Ariz., and Pinto Road along Interstate 40 between Sanders and Holbrook, said Adam Parker of the Navajo Nation Controller's Office.

The casino at Twin Arrows is projected to be open by March 2012. Twin Arrows is located along Interstate 40, approximately 24 miles east of Flagstaff.

"We are excited that we are moving forward," said NNGE Chief Financial Officer Derrick Watchman.

The projected casinos are expected to provide jobs, economic development, infrastructure and entertainment in the surrounding areas.