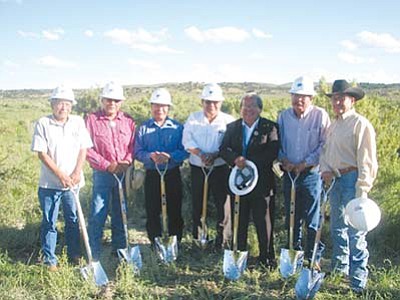 Medicine man Paul Long Sr. of Twin Lakes, N.M. offered his blessing for the groundbreaking of the new complex, a Leadership in Energy and Environmental Design (LEED) Gold certified facility. Long explained to event attendees the purpose of the blessing and said the offering is made to Mother Earth for permission to dig and build on the selected site.

The project is scheduled to start construction next month and completed in December 2011. The Bureau of Indian Affairs (BIA) will contribute $15.7 million and Navajo Nation will contribute $2.6 million for building the facility.

The TCDC also attended a banquet at the Department of Diné Education to celebrate the NDOT's one-year anniversary of being a division. On July 21, 2009, the Navajo Nation Council passed Resolution CYJ-21-09, which granted the NDOT division status.

"The Navajo Nation has so much potential, so much that we are barely beginning to tap into what transportation could be on the Navajo Nation," Platero said. "When we are able to provide information online to the public, when we tell you exactly what our graders have done and the partnerships with federal and state entities, we will become a true division. We are still four, five years away. We still need to build infrastructure such as this new facility."

Platero continued, "It took probably three years for the TCDC to really get to know us and build that trust. No one ever thought we would last that long."

He added that partnerships with programs in the Navajo government was important for infrastructure development across the Navajo Nation. "This committee said, 'You need to find what you want to do, where you want to be and what we can do to help you.' Our committee has taken a lot of flak from people in the community, from the agency, who said, 'Why are you giving NDOT all this money?' It was because we needed infrastructure."

Platero informed attendees that NDOT was one vote away from receiving direct funding from the Federal Highways Administration, instead of through the BIA. "The Intergovernmental Relations Committee ... would need to approve a piece of legislation to grant direct funding to NDOT, which will allow us to work directly with the Federal Highways Administration on a government on a government-to-government basis," he said.

TCDC members, including Council delegates from other standing committees, expressed their appreciation and support of NDOT's effort.

Begay said the efforts of previous leaders such as MacDonald and Delegate Mark Maryboy, who advocated for Navajo control, was a continual effort among current tribal leaders and officials.

"I want to thank Mr. Tom Platero and his staff for working with us the last four years," Begay said. "The construction of this facility is the testament of our great leaders, including Peter MacDonald and Mark Maryboy and the TCDC committee."

"I am also a great believer in our youth," Begay added. "Someday our people, our youth will have learned enough to administer the road needs of our people. I believe that will happen."

"One year later, after the signing of the resolution, we celebrate the Navajo Division of Transportation's anniversary," added Delegate Leslie Dele (Tonalea), a TCDC member. "The dream of TCDC and the division is that 'One day we will have super highways as well as railways across the Navajo Nation.' Many of us said, one day we will be like ADOT."

"The accomplishments of this division during their first year as a fully functioning division of the Navajo Nation is impressive to say the least and I applaud their determination to help build one of the most essential elements of the Navajo Nation's infrastructure," added Jonathan Nez (Shonto), a member of the Budget and Finance Committee. "This element is not only a factor in maintaining a nation, but it is also a method of further building and increasing productivity for this powerhouse called the Great Navajo Nation."

"In the mid 1970s, when we started talking about our dream, many people said, 'You guys can't do it, you do not even know how to drive a tractor,'" MacDonald said. "And that really drove a whole bunch of us to say, 'We can do it.' As a matter of fact, anybody who says that Navajo cannot do it is talking on the fighting side of me and I get mad and I'll say, 'Navajos can do it because our people are smart. They know how to get things done.' This is one example, here."

"You folks have done a wonderful job with this Navajo Division of Transportation," MacDonald concluded. "You will be surprised how much economic development will be brought to the Navajo Nation with improved roads."