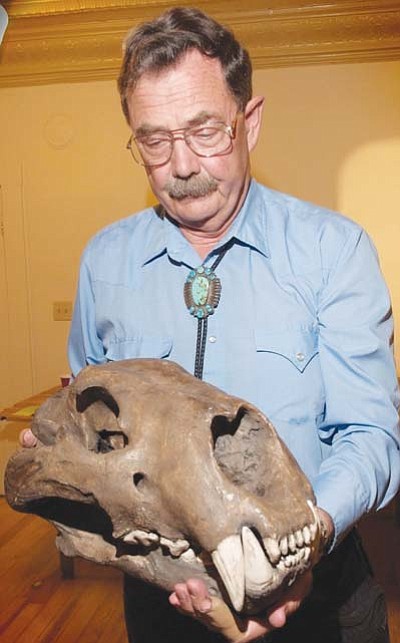 A lecture by archaeologist Miles Gilbert was held last Thursday evening in the historic Winslow Hubbell Trading Post. His one-hour lecture and slide show described Ice Age man and animals in Arizona. He also brought animal skull fossils. According to Gilbert, man was hunting in Arizona about 10,000 to 20,000 years ago when the climate was different. Grasslands supported a variety of animals we no longer see. There were woolly mammoths (basically hairy elephants), giant sloths (which look like an eight-foot-tall anteater), bears with long legs and large lion-like cats. Many other smaller animals existed at the same time, all of which were potential dinner for early Arizonians. Bones of many of these animals have been found with spear points stuck in them, demonstrating that early Arizona inhabitants hunted the ancient animals. Other bones and tusks have been found within a few miles of Winslow. A local construction company unearthed a complete wooly mammoth tusk, which was about six feet long. It is displayed in their office. If you would like to know more about ancient Arizonians, the Homolovi Archaeology Society of Winslow sponsors these lectures once every month. For more information, contact the Winslow Chamber of Commerce at (928) 289-2434.