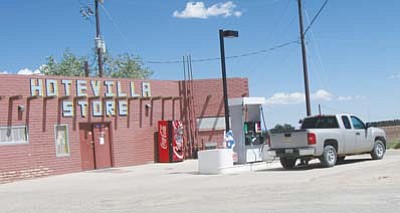 <i>Tyler Tawahongva/NHO</i><br> A customer purchases gas at the Hotevilla Community Store, which is continually upgraded to meet the needs of customers.

HOTEVILLA, Ariz. - Michael Hunter, manager of the Hotevilla Community Store, wants the Hopi community to know that the store is continually being upgraded to meet the needs of the community.

One of the upgrades made was to the gas pumps, which now offer mid grade as well as premium grade and diesel. The Hotevilla store is the only location that offers the higher grades of gasoline. He says that many newer vehicles require the higher grades and that tourists are often grateful that they offer that type of gasoline. He noted that it doesn't hurt to fill up your tank every month with a higher grade of fuel to help your engine run better and burn off some of the deposits left over from lower grade gasoline.

He also noted that they have upgraded their point of sale terminals to accept Electronic Benefits Transfer (EBT) and Women, Infants and Children (WIC) transactions.

The store opened a deli in March. They have a limited menu, but if customers call ahead, the cooks can prepare special orders like hamburgers or sandwiches. Every day the cook makes homemade burritos for breakfast and lunch.

The internet café is popular with the community. As long as customers buy something from the deli, they can use their internet connection for as long as they want. It is also very popular with travelers and vendors who have to keep in touch with their home base.

Currently, the Hotevilla store employs 13 people. Hunter invites the community to come in and talk to them. The employees are very courteous and customer-service oriented.

When asked whether traditional foods are sold, Hunter stated that his cook Bensita cooks traditional food during ceremonies and that he may consider selling traditional Hopi food in the future since it is healthy and may generate more business.

He also noted that sometimes customers ask for certain items - like dyes and paints - that are hard to get, but can be special ordered.

The store itself is owned by the village of Hotevilla and is overseen by a board that is pretty flexible to new ideas.