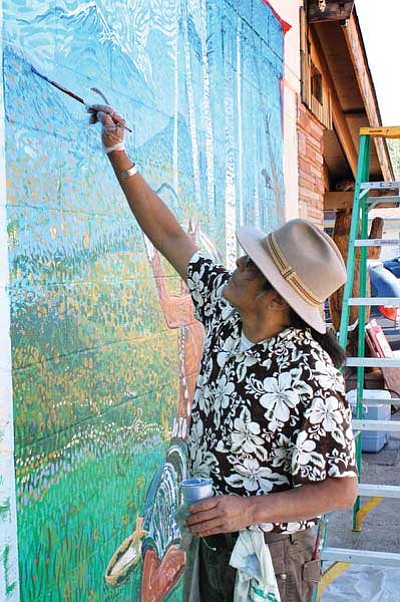 <i>Ryan Williams/NHO</i><br> Navajo artist Shonto Begay paints scenery on a mural entitled “Sacred Hunt” that was donated to the city of Williams last month. Begay worked on the mural in collaboration with fellow artist Cy Wagoner and an area youth group.

WILLIAMS, Ariz. - Much like a caterpillar transforms into a butterfly, one wall at the east end of downtown Williams was transformed from plain brick to the host of a vibrant multi-colored mural.

The mural, started July 3, is the work of Flagstaff-based Navajo artist Shonto Begay in collaboration with Cy Wagoner.

Begay said the idea for a mural on the west wall of Native America came from Williams Mayor John Moore.

"A group of friends came together and were eating lunch one day, including John Moore, and we talked about murals and the idea just hit him that Williams needed a new mural," Begay said. "I said 'I can do that' and that became a mission."

Moore said Begay has donated the historical mural to the city of Williams.

"We were talking about the history of the Navajo," Moore said. "They used to hunt Bill Williams Mountain and hunt in the area and live in the area. One thing led to another and we decided to try to find a location. Of course, Bill Freshour over there at Native America, he put a lot of time and money into getting it ready to go."

The mural features a Navajo hunter and a young boy preparing for a hunt.

"The image itself is totally from my head," Begay said. "I sketched it out ahead of time. It's an image of a hunter paying tribute to the animals that he is going to go hunt. To give that prayer, that honor before hand. Blessing it. So that's why the animals are coming out of the woods. All the ones we use as food. There are a lot of lessons and stories about the animals in the beginning. Creation. They know the purposes. How we sustain one another. Inhabiting the fourth world. I wanted to bring that. Also, the young boy learning the way."

Before Begay arrived at the site of the mural, the image to be painted was reversed. Lights mounted on the roof on the south end of the building prompted Begay to flip the mural.

"I realized the light played really well with the hunter," Begay said. "We switched the whole thing. We like challenges."

He received an Associate of Fine Art degree at the Institute of American Indian Arts in Santa Fe, N.M. and a Bachelor of Fine Arts degree from California College of Arts and Crafts. Begay said he focused his studies on the Italian Renaissance period.

Many of Begay's works exhibit impressionistic qualities, bringing the paintings of Van Gogh and his contemporaries to mind.

"I would call myself a Neo-Impressionist situated in my own unconventional reality," he said. "As a Native, we always work from the lens that we're born with, the things that we know. Basically, it's mainly about recreating that and of course education being a major part of it. When I do murals I always have young people help me."

Youth from Inspirations, Inc., a local organization dedicated to inspiring youth through positive outlets, as well as kids from the Flagstaff juvenile courts, were on hand at various times during the painting of the mural.

Sue Tamulevich with Inspirations, Inc. said working with Begay has been a once in a lifetime opportunity for those involved.

"Shonto was willing to have them work with them so they could learn his style," she said. "It's been a great honor for the kids to do this."

Tamulevich said under Begay's direction, kids involved with Inspirations were able to help paint some of the background of the mural.

Begay, the son of a medicine man and sheep-herding mother, said as a youth he drew constantly eventually finding his way to a career as an artist.

"The theme that I have, if there is a theme in my work, is just basically saying this is where I am from, this is the vision I carry," he said. "Just working from my own stories, my own angst. All the human angst. I sat through many ceremonies. A lot of times we chanted. Each dab, stroke and line I see as a syllable to those. Each work for me has always been about doing a ceremony again."

Begay's next mural will be painted at NAU for the Martin Springer Institute later this year although he has not chosen a wall to paint as of yet.

Moore said Begay's mural will be an added tourist draw.

"I think eventually if we get enough quality murals we'll have even more of a tourist attraction," he said.

For more information and to view more of Begay's work, visit www.shontogallery.com. Wagoner can be found online at